Hurricane Humberto snuck under the radar Wednesday morning and came hours short of setting a record for the latest first hurricane of any Atlantic hurricane season since the 1960s.

Humberto, which officials upgraded from tropical storm to a Category 1 hurricane around 5 a.m., fell nearly three hours short of the record. Hurricane Gustav still stands in the lead, as it strengthened to a hurricane around 8 a.m. on Sept. 11, 2002.

Humberto is a reminder of the lingering potential for strong storms, said University of Florida Chief Meteorologist Jeff Huffman, who provides weather content for WUFT News and at other UF media properties.

Before Humberto, the 2013 hurricane season was somewhat stagnant, contradicting National Oceanic and Atmospheric Administration (NOAA) predicted earlier in May. Although eight named storms have occurred, none of them were hurricane strength until Humberto. In terms of impact, strength, and duration, the season has been very inactive, Huffman said.

One of the biggest reasons for inactivity this season is the excessive dryness of the air, said Corene Matyas, associate professor of geography and hurricane science expert.

“The tropical cyclone could be in a moist area, (and) be developing, but as it moves, it moves into a drier region and then it starts to dissipate,” she said.

But the dry air is only a temporary factor. Chances for hurricanes will increase as ocean temperatures reach the highest point of the season in September, adding “a lot of moist air” for a hurricane to develop within, Matyas said.

Humberto is not predicted to make landfall in the United States. The hurricane is being pulled northward as a result of a weakness in a high-pressure system in the Atlantic.

“For the life cycle of Humberto as it stands now, and for the foreseeable future, (there are) no predicted impacts to the United States or Florida,” Huffman said.

October and November are months of particular interest to Huffman, especially in the Gulf of Mexico and Caribbean, where storms are most likely to form. Those systems are more likely to impact the United States because they’re closer to home.

Michael Spranger, UF professor and extension specialist in the family, youth and community sciences department, warns Florida residents not to get lulled into a false sense of security just because of the lateness of the season. He said they should start preparing as soon as a potential hurricane is forecast.

“Because we’ve had some lean seasons, it’s usually out of sight, out of mind and we forget about hurricanes,” he said. “But look at what happened in the northeast with super-storm Sandy. ‘Ah, it’s just a tropical storm.’ But what happened? You had storm surge, you had houses destroyed, you had loss of power and water for months at a time.”

The first step in avoiding catastrophe is deciding whether to stay or evacuate, Spranger said. Deciding at the last minute can be dangerous if there’s nowhere to go except a car. If riding out the storm, he advises stocking at least three days’ worth of water, one gallon per person per day, and food.

One of the lesser-known necessities is cash, Spranger said. People who rely on a credit card during a power outage may be forced to barter since the electronic credit card scanners probably won’t work.

Spranger’s motto is to “prepare for the worst and hope for the best.”

“You never can let your guard down,” he said. “And we don’t either. We look at everything at WRUF as potential impact. We’ve got to watch it closely, and we’ll do that ’til the end of the hurricane season.” 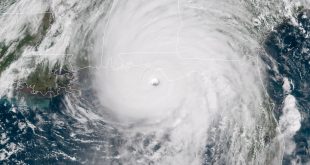 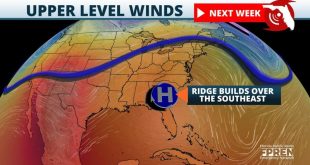 Gov. Ron DeSantis is expected to sign a new bill that would approve projects fighting sea-level rise and flooding.