Explaining The Process Behind The Dozier School Excavation

[jwplayer config=”News-video” file=”wuftnews/20130903dozier.mp4″ html5_file=”http://fms01.jou.ufl.edu/wuftnews/20130903dozier.mp4″ image=”https://www.wuft.org/news/files/2013/09/Dozier.jpg”] Michael Warren, program director of the C.A. Pound Human Identification Laboratory, describes what USF anthropologist, Erin Kimmerle will be looking for as she excavates unaccounted for bodies at the former Dozier School for Boys in Marianna. (Video by Donna Green-Townsend) 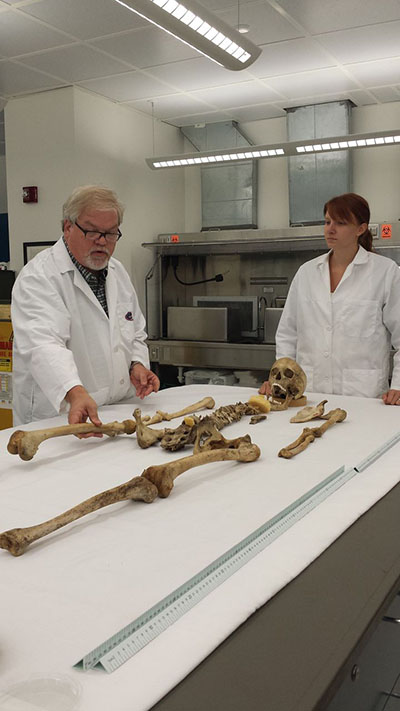 The first round of excavations for the bodies of former students at Arthur G. Dozier School for Boys may be coming to an end, but the identification of the remains is just beginning.

University of South Florida forensic anthropologist Erin Kimmerle and a team of archaeologists began excavating unmarked graves for possible remains of the children, and the four-day process ended on Tuesday.

After being denied multiple times to have access to the 31 unmarked graves dug at the school between 1914 to 1952, Gov. Rick Scott issued a permit for the team to identify and examine the unaccounted bodies buried at the school cemetery.

A group of former students, known as the White House Boys Survivors Organization, made allegations of abuse resulting in negative attention for the school.

Although the University of Florida’s anthropology department is not involved in the actual excavation, the staff at the C.A. Pound Human Identification Laboratory knows and explains the procedure Kimmerle and her USF team will use.

Program director for UF’s lab, Michael Warren, said he has a lot of experience in examining remains for high-profile cases like the death of Caylee Anthony and the Seath Jackson case in Summerfield.

“We always feel like in our laboratory we work for the families,” Warren said. “We want to resolve the issue where they can start the grieving process and move on with their lives. However changed they’re going to be because of the loss.”

After removing the remains at the cemetery, Kimmerle will begin the process of examining and identifying her findings, Warren said. He thinks the use of family DNA might play a role, but forensic anthropologists have their own methods to identify bodies with the bones.

Warren said Kimmerle will be able to tell the person’s ancestral group and height, and depending on the age, determine whether the individual was a male or female.

For an anthropologist, context is everything, Warren said.

Warren said he feels Kimmerle is working for justice, as all anthropologists do, treating every case in an equal manner https://rusbank.net/offers/microloans/zaymyi_bezrabotnyim/

Forensic anthropologist Kimmerle and her team is wrapping up after four days of excavation but still have a year-long window to search at the school. While lawmakers allocated $190,000, USF recently received nearly $424,000 from the U.S. Department for Justice for the project as well.