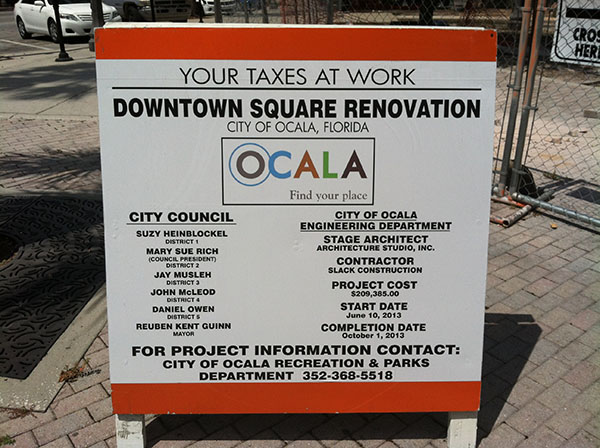 In the heart of downtown Ocala, piles of dirt, sod and wood lay scattered on the ground.

A renovated gazebo looks out over dust-covered workers as they carefully place bricks into the ground and rev chainsaws to life.

Brick City Square is getting a makeover.

The project will renovate the city’s original gazebo and will add a stage area, an additional plaza and a newly designed, star pattern made of bricks to the center of the square. Construction began June 10, and it is still in the works.

The city is spending about $200,000, which will come from the general fund, according to Mayor Kent Guinn.

Rolando Sosa, an architect with Architecture Studio Inc., said the goal of the project is to update the part of Ocala people use most.

“The whole area being renovated is the hub of social events for the city of Ocala,” he said. “Hopefully, it will revitalize what downtown has to offer.”

Sosa said his company renovated the existing gazebo and wired it for mechanical and electrical equipment so that small- to medium-sized concerts could be held in the square.

The renovation is acting as a general facelift, Sosa said, and will “augment what’s already there.”

Improving safety in the downtown area was another objective of the project, Guinn said.

“We put brick pavers with the concrete,” he said. “When it used to get wet, people would fall down, and we wanted to take care of that. It’s a better look and its function is better than before.”

Guinn said while the downtown renovation may seem like a big project, it’s only the beginning for what the city of Ocala has planned for the area.

“It’s a small process for a bigger process to come,” he said. “It’s sort of like dominoes. Everything else depends on this and the rest will fall into place after it.”

Project manager Elizabeth Houck agreed the renovation was just a fraction of what is to come for Ocala.

“It’s just another little piece of our total downtown restoration project,” she said.

The project is set to end by Oct. 1, but Guinn said he expects it to be completed sooner than that – a sentiment that will please the local merchants.

Because the area has closed off vital parking spots, some local shop owners are displeased with the lack of parking for downtown customers.

The displeased shop owners did not want to be named.

Sosa said generally work being done in downtown areas causes unhappiness among merchants and the public because of parking issues.

Others, including Lime Cabinet owners Mike Franco and Marjorie McGee, said though the construction is troublesome, it will ultimately be beneficial for downtown.

“It’s a bit noisy and a bit dirty, and it doesn’t look very pretty – but it’s construction,” McGee said. “I saw a quote that said, ‘The road to success is always under construction,’ and you can sort of apply that here.”

The main issue, Franco said, was the shock factor of fencing off the entire square and suddenly seeing things being torn up.

“It changes people’s feelings about what exactly is going on, how long it’s going to take and what the effect will be,” he said.

Franco said even though the parking issues are inconvenient for some shop owners, the finished product is what counts.

“We have some people that complain because we’ve lost some parking, especially the prime spaces around the square,” he said. “But the end result is a benefit for downtown, and a benefit for the public when they come.”

Hanna is a reporter who can be contacted by calling 352-392-6397 or emailing news@wuft.org.
Previous No Permit Required To Park Cars On Game Days In Gainesville
Next Despite Law Change, Not Many Floridians With New Tattoos Are Rushing To Give Blood