No Permit Required To Park Cars On Game Days In Gainesville 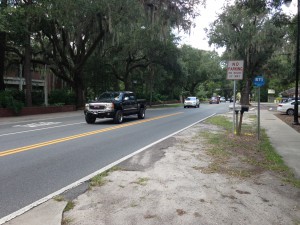 With football season beginning Saturday, Gainesville residents who live near Ben Hill Griffin Stadium have one thing on their mind: parking.

In the past, those wishing to make some quick cash by crowding their lawns with cars have had to purchase a $52.50 permit to do so. No permit will be required this year, City of Gainesville spokesman Bob Woods said.

For years, people who live in houses close to the stadium have charged game-goers to park in their yards.  Southwest Second Avenue residents Sarah Spann and Katrina DeKrey said the money they made parking cars at their house paid for their utilities.  They charge $20 per car.

Woods said the City Commission is revising the parking ordinance.  He expects the ordinance to be finalized on Sept. 5, but said that it will not go into effect until next football season.

The normal citation for someone parking cars without a permit is $250.  But according to Woods, no one will be cited this year.

DeKrey said she is excited about the news, and expects her neighbors will be, too.

Sarah is a reporter for WUFT News who may be contacted by calling 352-392-6397 or emailing news @wuft.org
Previous In Impoverished Bradford County, Schools Add New Technology To Improve Education
Next Ocala’s $200,000 Downtown Renovation Should Help People Stop Slipping On Its Bricks