How North Central Florida Teachers Compare in Salary and Education

Students and teachers are out for summer this week, as are FCAT scores.

The situation in those six counties is no different.

Education proponents — teachers and legislators alike — have long been doubtful of the state’s progress.

Teachers whose students hadn’t taken standardized tests yet were evaluated on the progress of students at other neighboring schools — students they never taught.

For those in the classroom, there’s another glaring problem: Florida’s teacher salaries ranked 45th nationally in 2012, according to the National Education Association, with an average salary of $46,000.

Since Gov. Rick Scott signed SB 736 in 2011, at least 50 percent of a teacher’s salary has been tied to students’ performance on standardized tests. Teachers who didn’t have students taking the FCAT were evaluated on the performance of students at neighboring schools.

Forty percent of a teacher’s current evaluation uses a value-added model to determine whether a teacher added any value or knowledge to a student during a school year.

With these policies causing rancor, politicians have changed course slightly. Gov. Scott proposed a $2,500 increase to Florida teachers’ salaries in late January. The Florida Senate Committee on Education approved Senate Bill 980, which sought to link teachers’ evaluations to the students they teach, but it died last month in the rules committee.

“I think it’s a matter of priority for the State legislature,” said Chris Altobello, president of the Marion Education Association. “I’m very hopeful that the budgets I’ve been hearing are going to come through because it’ll be the first time they be talking about increasing teachers’ compensation.” 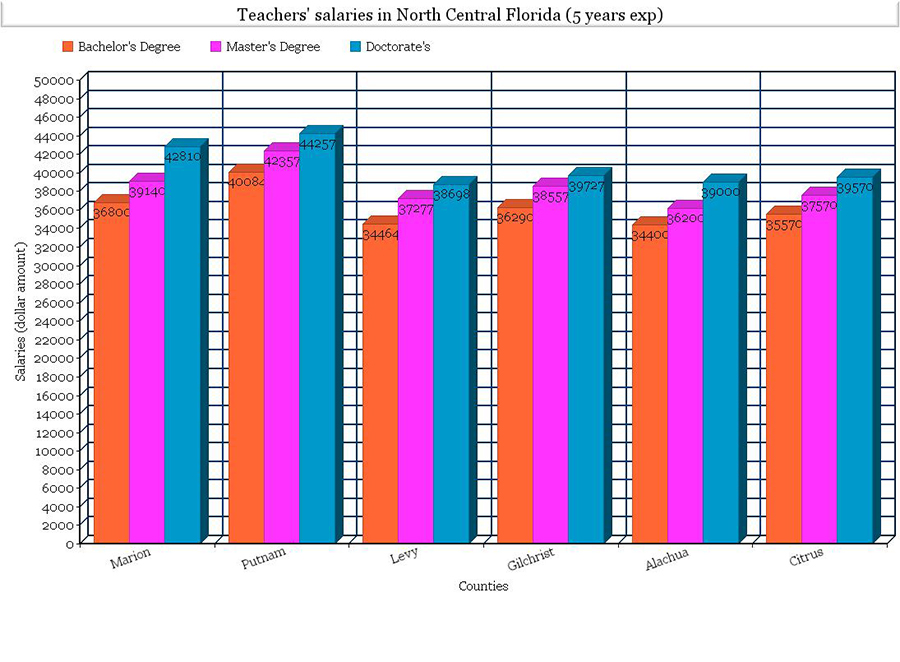 Teachers’ performance would still be linked to student achievement, but the final plan would be left up to the each school board district.

Legislators have set aside $480 billion for the pay raises, which is included in the overall $1 billion increase for education.

As for benefits for teachers in the region, a general benefit package includes health insurance, paid sick leave, life insurance and paid retirement for a certain number of years.

In Putnam County, full-time employees have a board-paid retirement, which comprises 4.91 percent of their salary. There are even some monetary incentives for some workshop courses. According to the Alachua County School Board, teachers who attend workshop activities outside of normal school hours can earn $15 per hour.

School districts are responsible for administering Teacher Professional Development Programs, which are better known as inservice offerings. In order to renew their teaching certificates, teachers are required to participate in these programs.

Faculty members of schools participate in these programs, which aim to enhance student improvement.

According to Joie Cadle, president of the Florida School Board Association, several school districts like her home district in Orange County, use what is known as the Marzano model when training their teachers. The Marzano model focuses on four areas: classroom strategies and behaviors, planning and preparing, reflecting on teaching and collegiality and professionalism.

“My principals are going through and doing evaluations in the classrooms, checking to see that teachers are using the model,” Cadle said.

Karen McCann has taught in the public school system for about 31 years and said she knew she was sacrificing when she decided to teach. She projected a teacher starting in the field (with at least a bachelor’s degree) would gain about $17,000 in a 25-year period.

“There’s compensation when you decide when to become a state worker. You know there’s certain things you’ll give up, but there’s some things you gain,” said McCann, current president of the Alachua County Education Association. “What you give up is pay.”

Shaneece is a reporter for WUFT News who may be contacted by calling 352-392-6397 or emailing news @wuft.org
Previous Volunteer Fighting Back Against Sequester Cuts for Marion Senior Services
Next With Only Four Left, UF Researchers Work to Replenish Schaus Swallowtail Population

University of Florida President Kent Fuchs announced in an email Thursday afternoon a lengthy list of changes the school will be enacting as part of its effort to address racism and inequity including the discontinuation of the "Gator Bait" cheer at UF sporting events.