By Stefanie Cainto and Samantha Shavell

WUFT News compiled police reports of all the crimes involving guns handled by the Gainesville Police Department in the past five years.

Overall, the news is good.

Since then, it has been decreasing. 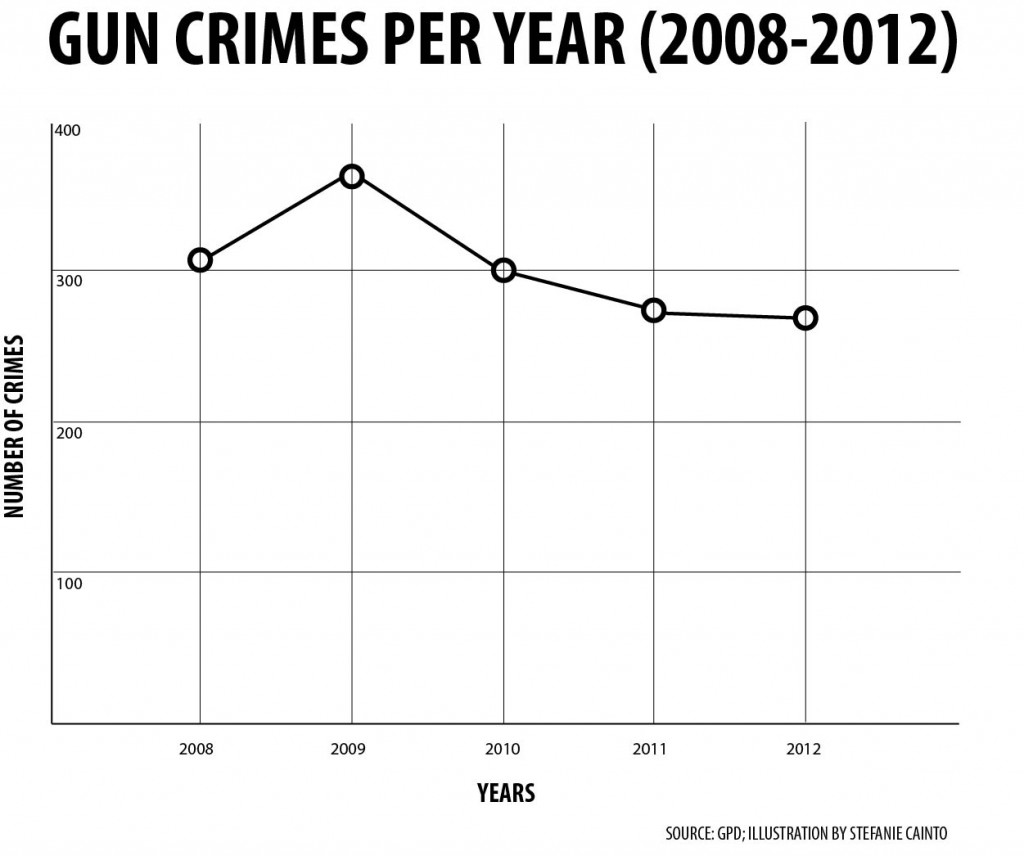 The location of 230 of the reported crimes could not be discerned because records were not available online. Regional Wilson, GPD’s records division supervisor, said records are omitted from the department’s online database when the crime is related to aggravated battery where the weapon used could result in death or serious injury.

Most often, these crimes include murder, domestic violence, child abuse and sexual crimes. GPD also tries to be conservative when it comes to juvenile records.

Wilson said crime victims or witnesses can fill out Form 240, which allows them to remain confidential, therefore shielding the documents’ availability online. 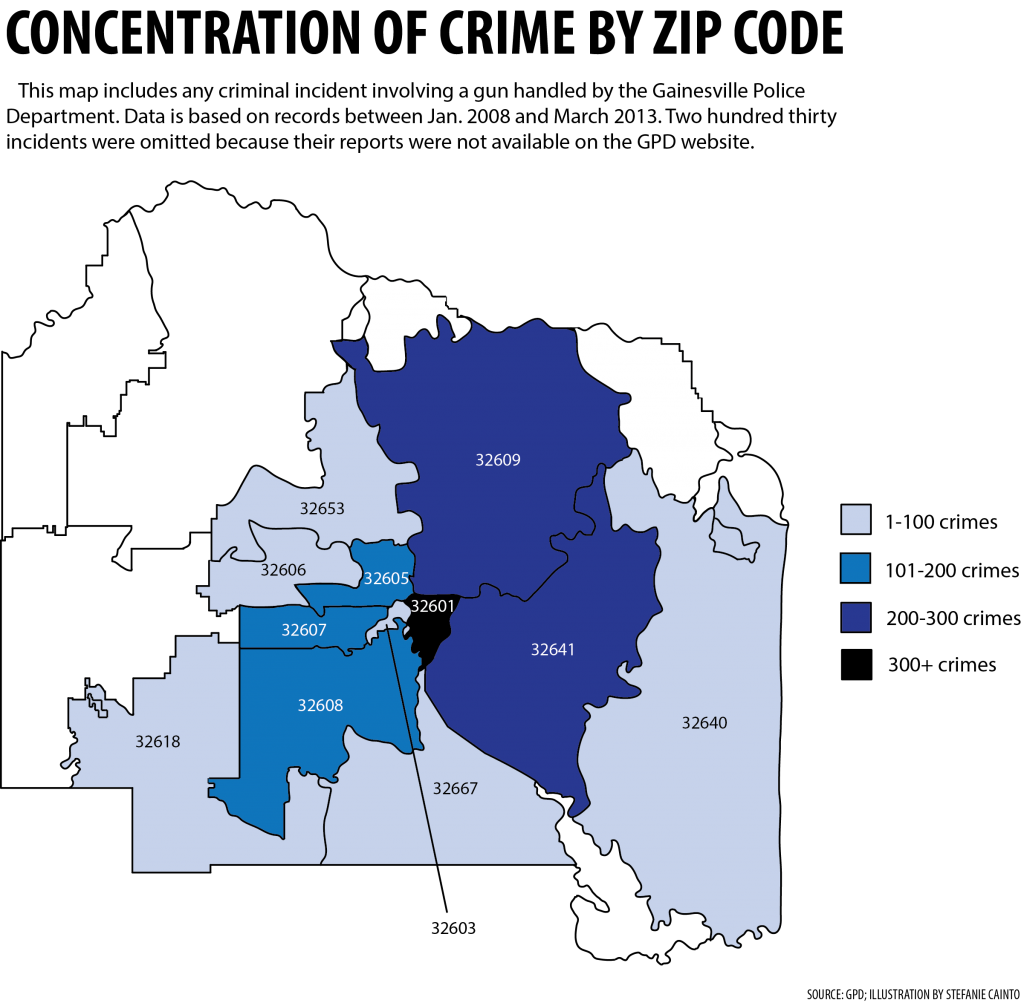 There are 12 ZIP codes in Gainesville where gun-related crimes have been reported. Five crimes were located outside city limits: one in Lake Butler and four in Ocala. In these cases, the GPD was assisting with investigation. These five reports are omitted from the above map.

ZIP code 32601 contained 379 gun-related crimes. That area is bordered by Northeast 16th Avenue in the north, Waldo Road in the east, Northwest 13th Street in the west and Southeast Williston Road in the south. It’s the only ZIP code with more than 300 crimes.

In ZIP code 32605, there were 130 reported gun-related incidents. This ZIP code is shaped like a boot and bordered by Northwest 13th in the east, Northwest 8th Avenue in the south, Interstate 75 in the west and a northern border varying from Northwest 23rd Avenue to Northwest 53rd Avenue.

In ZIP code 32607, there were 131 gun-related crimes. The ZIP code is bordered by Southwest 34th Street in the east, Parker Road in the west, State Road 26 and Northwest 8th Avenue in the north and Southwest 24th Avenue in the south.

In ZIP code 32608, there were 181 gun-related crimes. The ZIP code is bordered by Southwest 13th Street in the east, Parker Road in the west and Southwest 24th Avenue in the north. The southern border goes as far as the Kanapaha Prairie.

In ZIP code 32609, there were 202 crimes related to guns. The ZIP code is bordered by State Road 26 and University Avenue in the south. It goes as far west as Florida State Road 121, as far north as Sunshine Lake and as far east as North Main Street.

ZIP code 32641 had 202 gun-related crimes. It is bordered in the east by the cities of Melrose and Hawthorne, in the south by Paines Prairie Preserve State Park, in the west by Northeast Waldo Road and in the north by State Road 26. 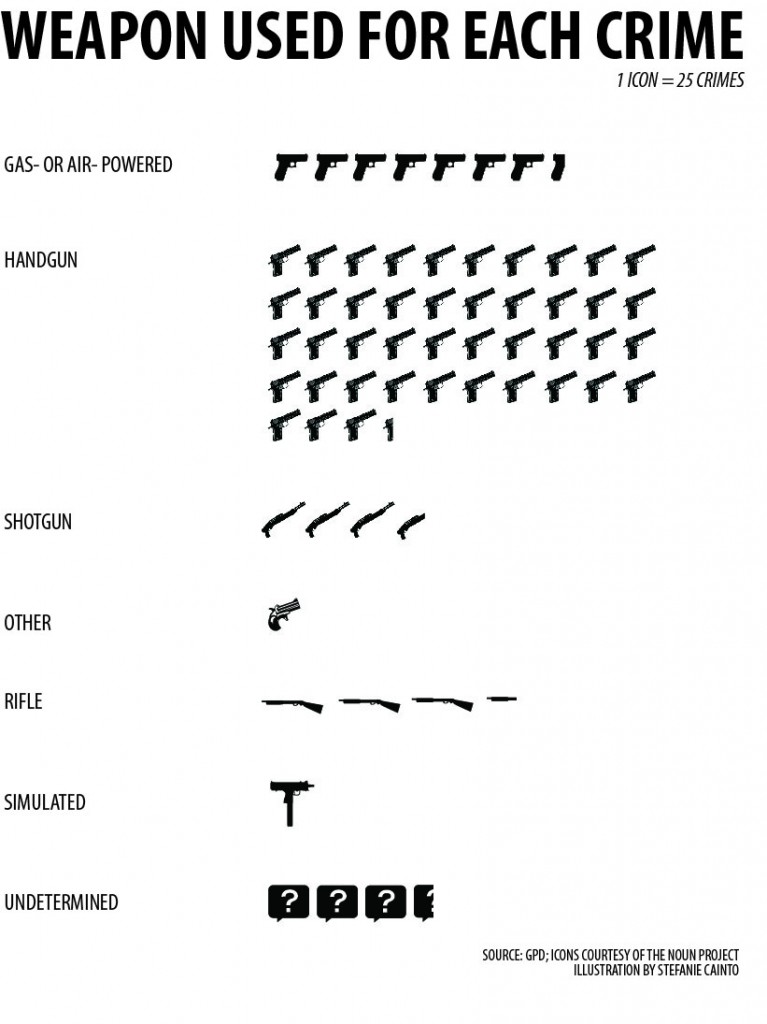 In the last five years, 1,079 crimes involved a handgun, making up about 68 percent of all reported crimes. One hundred eighty three crimes involved a gas- or air- powered gun, 94 involved a shotgun, 25 involved “other firearms,” 89 involved a rifle and 22 involved a simulated weapon. For 85 of the crimes, the gun type was undetermined.

The most common crimes in the last five years were robbery with 399 incidents, weapons violations with 197 incidents and assault with 193 incidents, according to the records.

Stefanie is a reporter for WUFT News who may be contacted by calling 352-392-6397 or emailing news @wuft.org
Previous Police: Ocala man shot three others after video prank
Next When and Where Alachua County Students Can Eat Free in Summer 2013