Language a gateway to growing in Haiti

Editor’s note: On Jan. 12, 2010, Haiti was hit with a 7.0-magnitude earthquake that left the world shocked and eager to help. Since the earthquake, the New York Times estimates that nearly seven billion dollars has been given to Haiti from around the world. Florida’s 89.1 WUFT-FM’s Leah Harding recently visited Haiti and reports on the growing push for sustainability within the small Caribbean country.

It has been three years since a 7.0 magnitude earthquake hit Haiti, killing an estimated 200,000 people. Despite suffering, rebuilding and years of recovering, some Haitians still possess joy and hope worth singing about.

Ernst Ladeceaur, 22, said the earthquake brought him out of poverty.

Before the quake, Ladeceaur had no income, could not speak English and was struggling to finish high school. But after, he began teaching himself English. He started working as a translator and a construction worker.

Ladeceaur is being sponsored to attend a university in Port a prince} and hopes to graduate in three years. He said he plans to become a diplomat when he graduates, helping others realize their potential the way that he was shown his.

“I did not have the opportunity,” Ladeceaur said. “I found it. God put someone in my way to give it to me.”

Ernst is not the only Haitian looking to learn English and take advantage of opportunities.

Haiti is Bertrhude Albert’s birthplace, but she moved to the United States as a child. Now, she is the president and co-founder of Projects for Haiti, a Gainesville-based non-profit organization that helps teach English to Haitian locals.

She said teaching them the language is a way to encourage long-term sustainability.

“One of the things that we have is an English Association,” Albert said. “We supply them with books, audios, cassettes, training so that they can have an organization that fosters teaching yourself English.”

Albert says that teaching Haitians how to thrive is more effective than giving them handouts to survive. Projects for Haiti requires participants to pay a small fee which is used to fund the organization’s teaching resources, she said.

“They have paid for it, they have worked for it, and they value it, they cherish it because they’ve given a piece of themselves,” Albert said.

Even after the progress since the earthquake, ruins of homes and buildings and cracked pavement are proof that this Caribbean country still has a significant journey ahead.

Ethan is a journalist at WUFT News. He's a Pennsylvania native who found a home reporting Florida's stories. Reach him by emailing emagoc@wuft.org or calling 352-294-1525.
Previous Job market improving for Florida, national law school graduates, but it’s not great
Next In Florida’s best recycling county, bearded man has repurposing plan 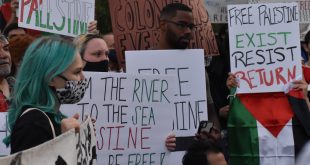 A wave of red, green and black on Wednesday flooded the corner of University Avenue and 13th Street in Gainesville as about 250 protesters united in solidarity with Palestine.