Despite a warm Florida winter, a new Burlington Coat Factory store will soon open in Ocala.

City officials estimate the store, which will be located at State Road 200 and Southwest 27th Avenue, will bring at least 75 new jobs and other economic benefits to the area.

Kevin Sheilley, president and CEO of the Ocala/Marion County Chamber & Economic Partnership, said the store is coming during an economic turn-around for the city.

“Ocala was especially hard hit during the downturn, but actually throughout 2012, they led the state … in percentage job growth,” he said. “And we’re really seeing that continue to accelerate.”

“I think that any time you get a national company investing in the community, it’s a good thing,” he said.

He said the store’s opening will have a significant economic impact on the community. The store will improve property and tangible tax revenues, he said.

Construction crews and subcontractors will also benefit from the store’s opening because the facility will require remodeling, Sheilley said.

The Ocala/Marion County Chamber & Economic Partnership is also working to bring manufacturing companies to the area because they tend to attract more businesses, he said.

The Burlington Coat Factory is expected to open in a few months.

Ethan is a journalist at WUFT News. He's a Pennsylvania native who found a home reporting Florida's stories. Reach him by emailing emagoc@wuft.org or calling 352-294-1525.
Previous Feb. 15, 2013: Morning News In 90
Next Florida has highest foreclosure rate five months running 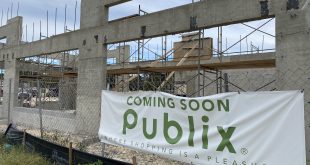