Nathan Ferrell sat at a booth Tuesday at the Gainesville IHOP on 13th Street. He dipped a ladle into a plastic container of pancake batter and poured its contents onto a portable pancake griddle.

In exchange, customers can give a donation of any amount to the Children’s Miracle Network, a national nonprofit organization that raises money for children’s hospitals, or other designated local charities.

Money donated to the Gainesville IHOP and six other local IHOPs goes to the Children’s Miracle Network at Shands Hospital for Children at UF.

Though open 24 hours, the Gainesville restaurant will only serve free pancakes Tuesday until 10 p.m.

Last year, the seven restaurants raised about $19,000 for the hospital. More than $3 million was raised for charities nationally.

“It’s a wonderful way for the community to come together for one great cause that will help all the local children and their families,” said Brianna Swales, the communications coordinator for Shands.

He said he’s never run out of batter before. He ordered 800 pounds of buttermilk for this year’s event.

“I’ve got so much stuff back there, you have to climb on top of things to get through it,” Creasman said.

IHOP has raised more than $10 million for charity since the first National Pancake Day in 2006.

Stefanie is a reporter for WUFT News who may be contacted by calling 352-392-6397 or emailing news @wuft.org
Previous Feb. 5, 2013: Morning News In 90
Next Florida-based convenience store chain raises $1 million for children’s hospital 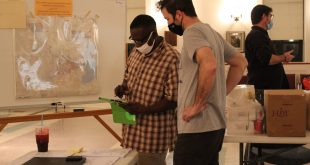