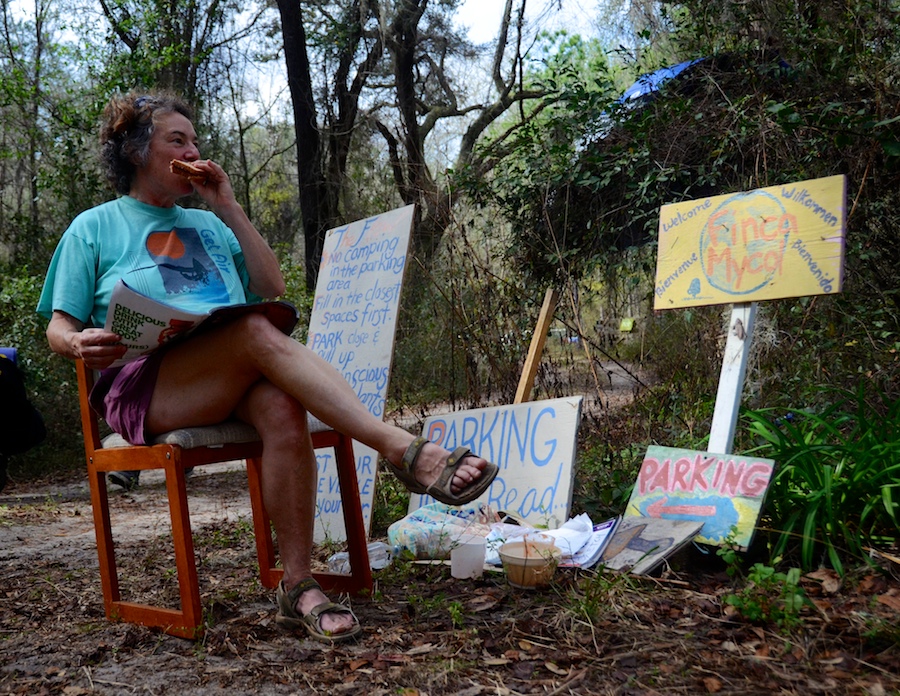 Debbie Harkrader, 56, eats a peanut butter and jelly sandwich while waiting to direct newcomers to the Florida Earthskills Gathering on Wednesday. She’s a masseuse, potter and tutor from Virginia.

About 30 minutes north of downtown Gainesville, past farm land and dirt roads, under shady trees and the bright sun, Finca Mycol bustled with volunteers Wednesday.

They worked on setting up a green house, preparing a first aid tent and putting up signs for the hundreds of visitors expected this weekend.

Meanwhile, Michael “Mycol” Stevens sat inside his home Wednesday surrounded by books, musical instruments and colorful tapestries. With another volunteer, he hashed out the legal terms in a waiver and refined the workshop schedule.

Stevens, 43, owns Finca Mycol, an off-the-grid homestead that focuses on permaculture and ecological restoration. The name comes from “finca,” a Spanish word for farm, and “Mycol,” Stevens’ way of spelling his name that removes biblical connotations and adds his love of mycology.

The four-day gathering will focus on ecological reconnection and experiential learning. About 80 instructors from around the country will lead more than 200 workshops and demonstrations.

“This is edutainment at its finest,” Stevens said.

Other group activities will include yoga, bartering, music and dancing.

“The drum circle will be kicking it,” Stevens said.

More than 300 people attended last year’s gathering, he said, and about half came from Asheville and the Appalachian mountain area. He expects more people this year, with a couple coming for the weekend from as far away as Central America.

Walking down the connecting loop trail Wednesday, two 18-year-old volunteers said they met at Finca Mycol a week ago.

Mark Rhones, from Washington D.C., and Lukas Jaeger, from Switzerland, said they were there to improve their cooking skills and learn skills like tree climbing.

Another volunteer, Debbie Harkrader, a 56-year-old masseuse, potter and tutor from Virginia, said she was most looking forward to experiencing the community the gathering will create.

Stevens regularly hosts volunteers at his property, he said, and he estimates about 100 have stayed in the last six years. Originally from Ohio, Stevens studied nuclear and environmental engineering at the University of Florida. He spent time as an engineer in the Navy, then he traveled around the world and worked for a nonprofit in Central America.

“I’ve been rogue my whole life in a lot of ways,” Stevens said, “especially after the Navy.”

He now works as an ecological restoration botanist with the Florida Fish and Wildlife Conservation Commission. On the side, he teaches wild mushroom foraging, ethnobotany and conservation and restoration ecology.

Stevens said he hopes the event inspires people and changes the way they think. For example, instead of replacing a broken tool at a corporate store, he said, people can learn to fix it. And instead of pressing a button on a music player, they can learn to make music together.

He imagines some visitors will leave the gathering wanting to recreate the ecological focus and sustainable practices of his homestead on their own property, he said. He hopes others leave with a greater sense of care and respect for the land and the native species surrounding them.

“Allowing them to thrive allows us to thrive, too,” he said.

When? Thursday through Sunday (January 31 through February 3). Workshops and group activities will take place all day, and overnight camping is encouraged.

How much? A sliding-scale donation of $100 to $200 for all four days or $35 to $70 per day. Participants can enjoy communal meals for another $50 for four days or $15 per day. Children under 12 attend free and can join supervised children’s activities during the day. The suggested donation for children’s meals is $25 for four days. Stevens said all the money will go toward the event and paying instructors.

If you go: After registering and signing a waiver, participants can sign up for the workshops. Heavy alcohol consumption and pets are not allowed, and cigarette smoking is discouraged. Visitors should bring their own bowls, plates, cups and utensils and are encouraged to bring local, organic food and musical instruments. Those staying overnight should bring gear for primitive camping. The property does not have electricity, shower facilities or trash services.

A full schedule of the workshops and activities and more information about the event can be found at floridaearthskills.org. 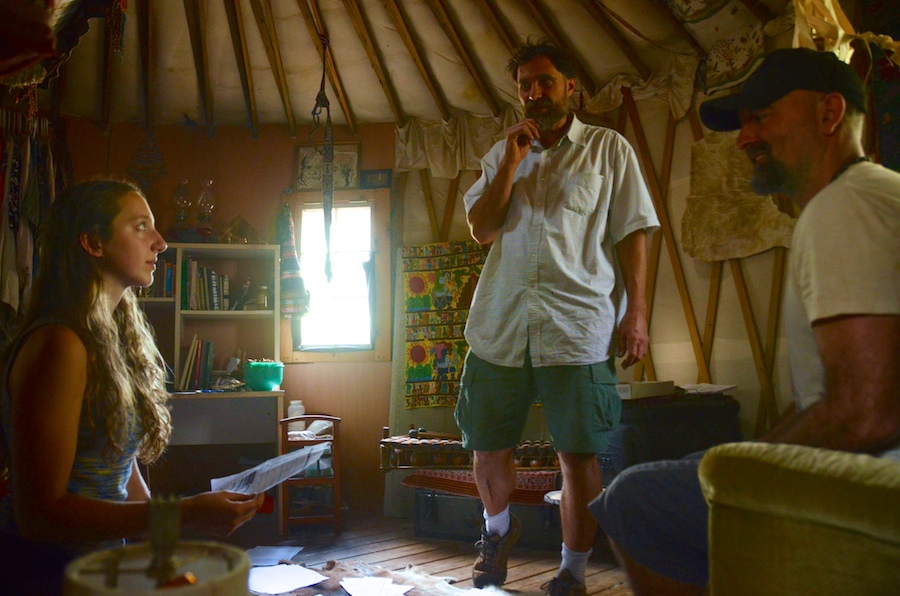 Michael “Mycol” Stevens, 43, the owner of Finca Mycol and one of the organizers of the Florida Earthskills Gathering, talks with volunteers in his yome (a one-room yurt-style house) on Wednesday. The outside of Stevens’ yome at Finca Mycol the day before the start of the third annual Florida Earthskills Gathering. Stevens works on logistics for the Florida Earthskills Gathering inside his yome on Wednesday. Stevens refines the schedule of workshops for the third annual Florida Earthskills Gathering on Wednesday. Alli is a reporter for WUFT News and can be contacted by calling 352-392-6397 or emailing news@wuft.org.
Previous Santa Fe College included in ‘low-cost’ degree challenge
Next Missing Ocala boy found