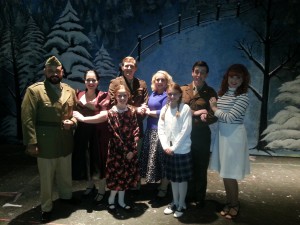 Gainesville will soon get into the holiday spirit with performances of “White Christmas” by the Gainesville Community Playhouse. Shows officially begin this Friday at the Vam York Theater, but a preview performance will be held Wednesday at 8 p.m.

This play is based on the 1954 movie musical featuring Bing Crosby, Danny Kaye and Rosemary Clooney. The story focuses on two former soldiers turned stage performers who decide to use their talents to help their old general save his winter resort.

“I always really loved the big screen musicals,” Lewis said. “‘White Christmas,’ as soon as it came out, it was an every year thing.”

The music of Irving Berlin will come to life in this show through various songs, including “Snow” and “I’ve Got My Love To Keep Me Warm.”

“‘White Christmas’ to me is all about family and coming together,” Christophy said. “This show is timeless.”

The Gainesville Community Playhouse provides opportunities for professional actors, college students and younger members of the community to participate.

Giovanni Barrio, one of the cast members, has one message for the audience. “If you have a Scrooge in your life, bring him to the show,” Barrio said.

Performances will be held Nov. 23 through Dec. 23. Shows on Wednesday through Saturday are held at 8 p.m., and Sunday shows are held at 2 p.m. Tickets can be purchased at the box office or with a credit or debit card over the phone.

Ethan is a journalist at WUFT News. He's a Pennsylvania native who found a home reporting Florida's stories. Reach him by emailing emagoc@wuft.org or calling 352-294-1525.
Previous The Hippodrome is getting into the holiday spirit
Next Amid calls for cheerleading safety, an examination of the activity as sport