What’s the strangest thing you’ve flushed down the sink or dropped down the toilet? The responses Gainesville Regional Utilities customers gave for that question might be surprising. 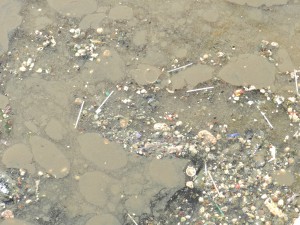 Answers ranged from rings and hair ties to prescription glasses and a dead baby gator. One woman even accidentally flushed her husband’s dentures.

Regardless of the item, once trash enters the sewer system, it has to travel through a series of pumps, pipes and valves—causing clogs and blockages along the way.

GRU wastewater operators have to clean it out, and these efforts influence rates.

The first stop for the trash is a lift station, which is a pit containing two pumps. There are 165 lift stations throughout Gainesville, each serving roughly 10,000 people. Large pieces of trash or clumps of congealed grease cause blockages here, but the biggest problem are what those who work in wastewater call “rags,” which are interwoven balls of flushed paper products.

“When you tear apart a paper towel, it’s got stringy stuff in it, and if that gets into a pump, it spins round and round and makes this sort of cloth,” said John Bacom, a maintenance mechanic for GRU who monitors and repairs the lift stations.

Rags start forming as soon as paper products—like paper towels, wet wipes and tissues—enter the system and group together, causing clogs which the operators have to “de-rag.” At least 3 lift station pumps or valves need to be cleared every day.

“We look at a pump report every morning. We try to monitor the run time on the stations so that we can tell when there’s a problem with a rag or any other type of debris in the pump,” said Bacom. “You have everything from rags to pieces of PVC or a stick or anything that doesn’t belong in there, none of which will pass through the pumps or the valves without causing problems.”

After being pumped from a lift-station, all wastewater travels to a water reclamation facility. The Kanapaha Water Reclamation Facility serves GRU customers west of Main Street. The water that goes there enters through barrier screens, which are grates that block anything wider than a marker.

Every so often, the screen lifts up out of the water and is scraped against edge, sending wet piles of trash plopping down onto some conveyor belts. The conveyor belts take squishy piles of paper towels, wet wipes and feminine hygiene products down to a dumpster. The plant fills multiple dumpsters every day, and quite a bit of trash makes it through the barrier screens.

The wastewater then moves through a series of basins. Trash gums up the works throughout the whole process. Operators at the facility have to remove the trash by hand, sometimes using nets and pitchforks to do so.

“It seems to happen at the most inopportune times—that is, you’ll have a million other things we need to be doing and you’ve got to kill what you’re doing to go fix that,” said Demitri Barton, an operator at the Kanapaha Water Reclamation Facility.

“Sometimes we have golf balls flushed down the toilet, and those plug the classifier. So we have to go up to the head works and jam a hose in there to get the system back moving again,” said Barton.

And golf balls aren’t the strangest piece of trash to caused problems. Orange peels being flushed down the toilet at the Gainesville Correctional Institute caused a  problem a while back.

“Years ago at a lift station outside the prison, we found a lot of orange peels, and the story goes that the prisoners were using the orange peels to make alcohol,” said Tony Cunningham, an environmental engineer for GRU.

According to Cunningham, the orange peel situation got so bad that GRU installed a grinder pump at the lift-station that serves GCI.

While GRU has no official estimate of the amount of money it spends on cleaning out trash, the utility company acknowledges that it is significant enough to influence rates. Cleaning out the pumps at the lift-stations in the morning takes about two and a half hours.

Determining the exact influence on rates is incredibly complicated, but one thing is certain: If there were less trash in the wastewater system, the utility rates for GRU customers would be cheaper.

So what items shouldn’t be flushed down the toilet or dropped down the sink?

“When you go to the bathroom, you flush that and toilet paper and really nothing besides that should be flushed down the toilet,” said Cunningham.