Missouri fan Patrick Cox felt at home in the Swamp

The sea of orange and blue, organized chants and a powerful band may seem intimidating for some fans supporting the visiting team at the Swamp, but one University of Missouri fan felt different this weekend.

Patrick Cox came to Gainesville wearing the Mizzou black and gold proudly when it was the Tigers’ turn to face the Gators.

Not only is this Mizzou’s first season in the Southeastern Conference, it was also their first trip to the Swamp in school history.

For Cox, he’s happy he can be a part of that history.

The two teams have only played once before, in 1966, and Mizzou came out on top.

Now, with the recent Gator victory, the teams are tied at one victory each.

Ethan is a journalist at WUFT News. He's a Pennsylvania native who found a home reporting Florida's stories. Reach him by emailing emagoc@wuft.org or calling 352-294-1525.
Previous 23rd Precinct changes voting line arrangements due to weather
Next Police warn Gainesville residents of phone scam 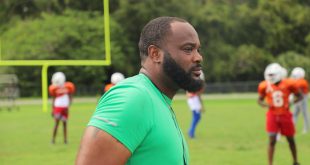