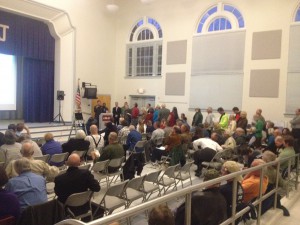 People wait to speak at the meeting.” credit=”Monica Marin, WUFT-FM

It was a full house at Gainesville’s A. Quinn Jones Center on Tuesday night where a meeting was held to hear public opinion on changes that could be made to part of NW 8th Ave.

The city plans a major resurfacing of the road.  The Public Works Department says that includes narrowing a stretch of 8th from NW 23rd to NW 34th.

The suggestion is that the current four lane road be reduced to two lanes with each lane going in one direction.

According to the Public Works Department, it has based this recommendation on public input and studies show many pedestrians and bicyclists in the area.  But right now there is neither a final plan, nor final cost, although estimates put it at more than $3 million.

Many who live near the road spoke out last night in favor of the proposed changes. Walt Barry who has lived in Gainesville for 20 years believes the changes will benefit the area in more ways than one.

Barry is both a cyclist and a driver and is an advocate of bike lanes because of cars speeding which he admits he is guilty of as well. Many at the meeting had opinions similar to Barry’s claiming that the road is currently not safe for pedestrians, bikers or people who live in surrounding neighborhoods.

However there were also many opposed to the changes because of possible traffic jams. People like Sam Goforth who commute to work around the city say this road is a major vessel for traffic and narrowing it would only make things worse for drivers and pedestrians.

Goforth and others at the meeting expressed their concerns not only for getting around the city during the week for work but also on Gator game days.

There were more than 30 people who got up to express their comments and concerns about the recommendations and the meeting lasted about three hours.

Rahim Harji, Project Manager with the city of Gainesville, plans to take all of the feedback into consideration when recommending a final plan to the city commissioners at the next meeting.

Monica is a reporter who can be contacted by calling 352-392-6397 or emailing news@wuft.org.
Previous Professor Susan MacManus discusses how Hurricane Sandy will affect election, voting
Next Missing Gainesville toddler OK