Paul Ryan speaks to crowd of 1,500 during hot Ocala afternoon

By Denise Toledo and Wade Millward

Vice presidential candidate Paul Ryan competed with hot weather and a heated crowd of his opponents’ supporters at a campaign event in Ocala on Thursday.

The Republican congressman from Wisconsin answered North Central Florida residents’ questions in a town hall style campaign event. The event was held in the Ocala Downtown Square, where the temperature hovered around 87 degrees.

About 1,500 people came to the event, according to The Gainesville Sun. No official crowd total was counted. Jeff Bechdel, a spokesman for the state campaign for Republican presidential nominee Mitt Romney, estimated thousands gathered at the square.

He recommended limiting government’s role, but also noted government’s importance. He spoke about when he was young, after his father’s death, his family depended on the elder Ryan’s Social Security survivors benefits.

He spoke against President Barack Obama’s health care reform law, calling it a government takeover of health care, and said Social Security can be preserved through slowly decreasing benefits for the wealthy and slowly raising the retirement age over time.

Ryan said his ticket’s policies will “guide us out of the mire we’ve been stuck in for the past four years.”

“Do we want to run at our problems, or away from them?” Ryan said.

“The government works for us, not the other way around,” he continued. “We have a very clear choice: stagnation or growth?”

Outdoors, the Ryan crowd was susceptible to both the heat and jeers from the pro-Obama crowd. 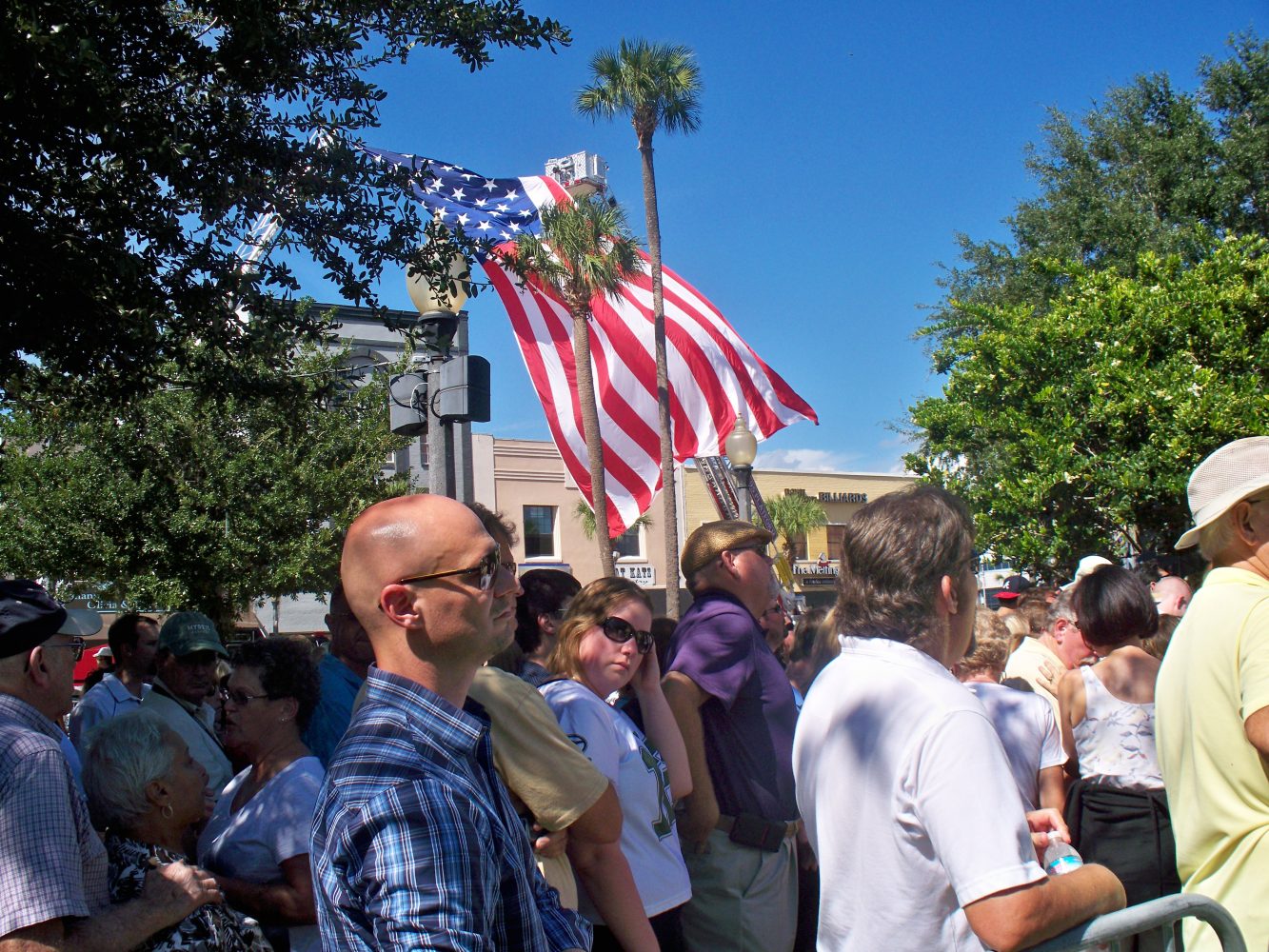 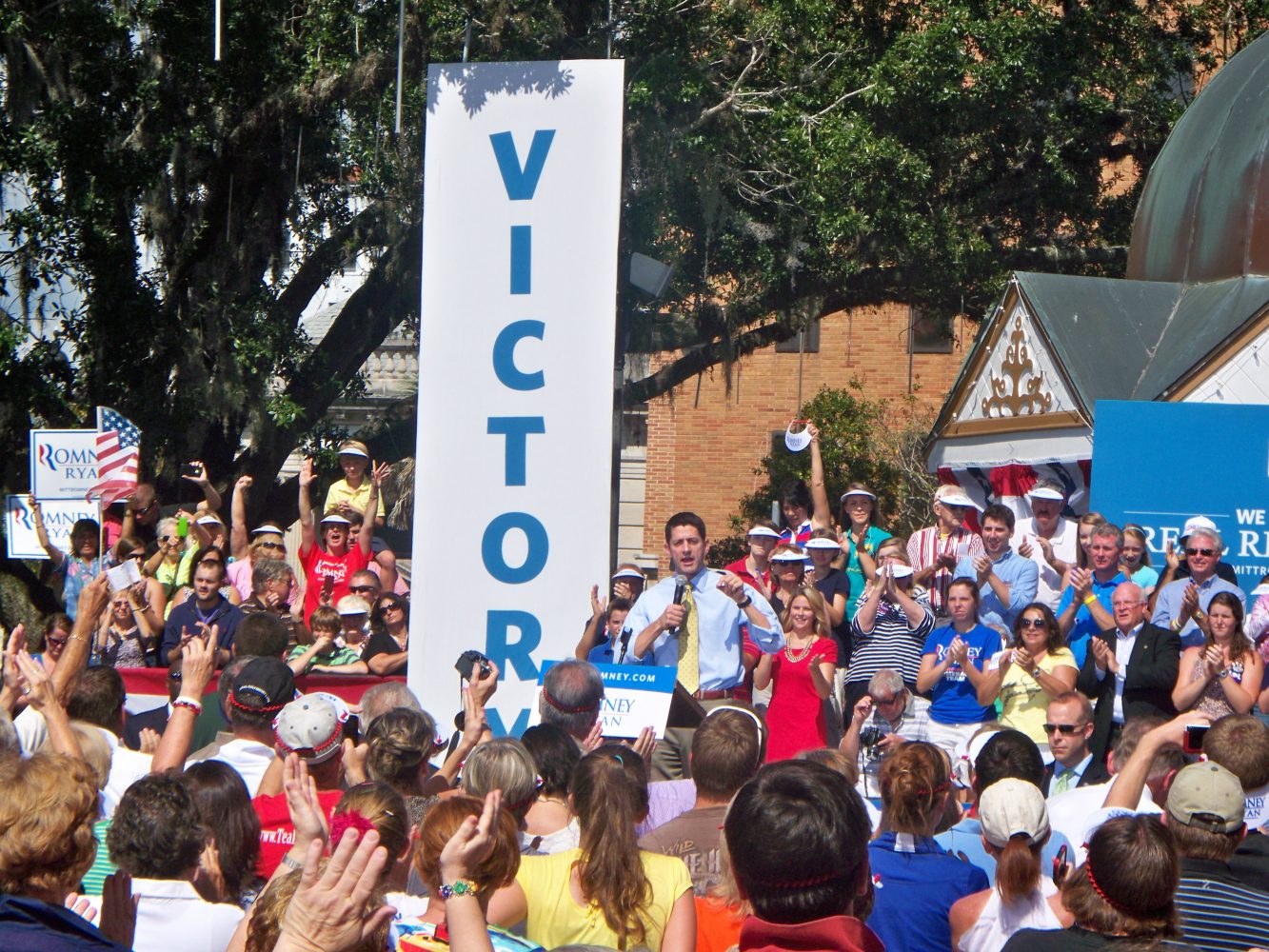 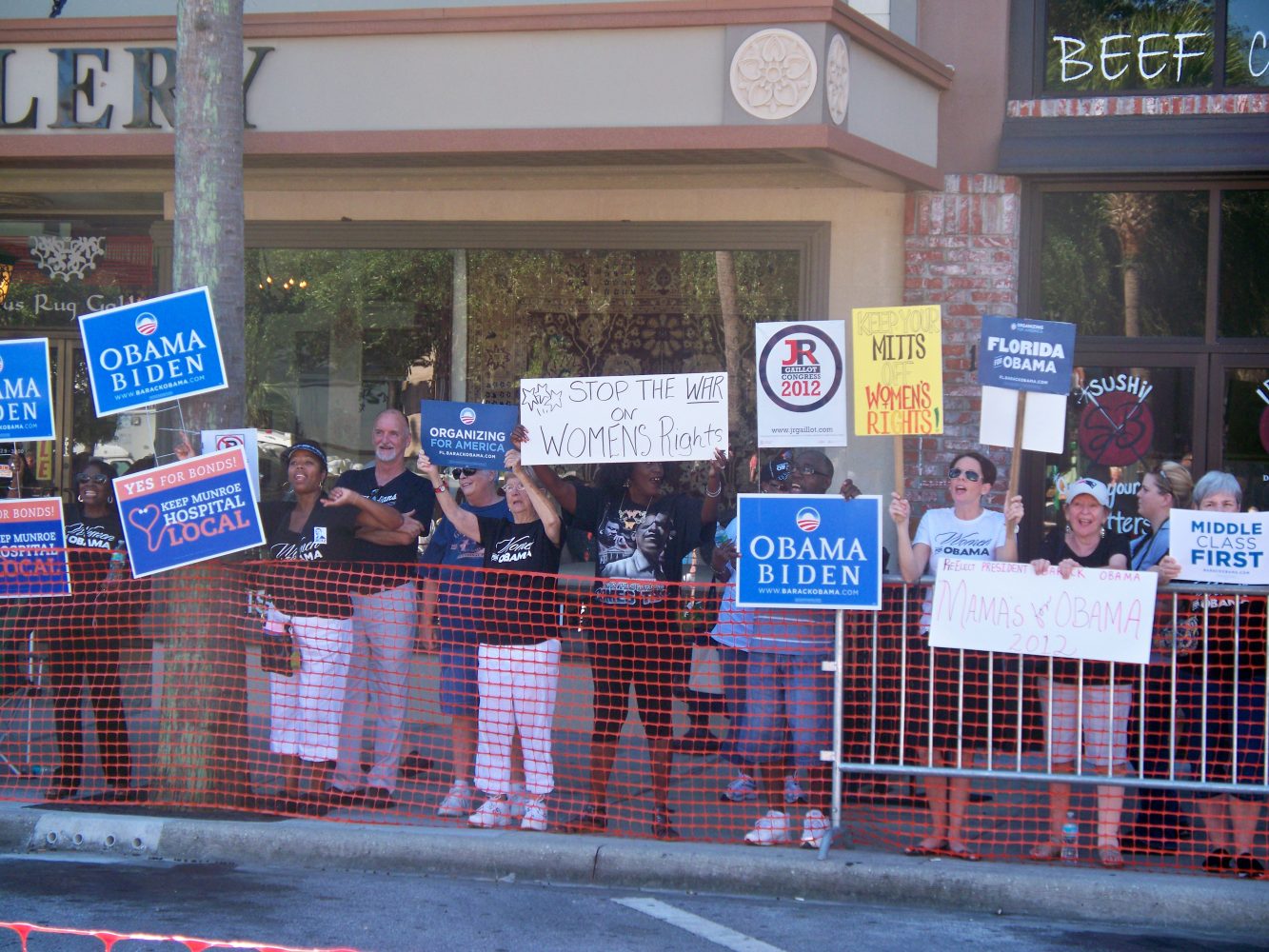 Shouts of “liar” and “no more lies” during Ryan’s answers prompted some rebuttals from the Ryan crowd.

During one of Ryan’s responses, Obama supporters’ cried “malarkey,” copying a term Vice President Joe Biden used against Ryan during their debate.

This prompted Ryan crowd member Anthony Otero Jr., to turn and yell “Benghazi,” referencing the Sept. 11 terrorist attacks on the U.S. consulate in the Libyan city.

Otero said Obama’s supporters didn’t affect his time at the event and their picketing was in vain. He said the city will side with Romney, citing six signs supporting the former Massachusetts governor on Otero’s street alone.

“It’s to be expected,” the Ocala real estate appraiser said of the Obama crowd. “I bet you don’t see this kind of thing at an Obama rally.”

Ocala resident Corey Astrom was one of the nearly 50 Obama supporters picketing and chanting across the street from the event. She carried signs reading “Florida for Obama” and “Keep your Mitts off Women’s Rights.”

Astrom said she came out to raise awareness for pro-Obama residents in Ocala, a city she said favors republicans.

“There are Obama supporters in Ocala,” she said. “We’re going to do what’s necessary to make sure Obama wins.”

Norman Andrade, a self-described independent Ocala voter, said he liked the event. After hearing Ryan speak, he said he now leaned toward the Romney-Ryan ticket.

Andrade, an 18-year-old physical therapy student at the College of Central Florida, located about three miles from where Ryan spoke, said this is the first election he can vote in.

He said he saw Michelle Obama speak at the University of Florida in September, but worsening conditions for his dad’s small renovations company and Ryan’s performance drew him closer to voting for the Republicans.

Andrade said he found the Obama supporters rude for screaming during Ryan’s responses. He said the experience didn’t make him think worse of the president, just the president’s supporters.

“I’m here trying to see both sides and they’re here demeaning the event,” he said. “They didn’t show respect to the meeting here.”

Debi Pardee said she found Ryan’s event exciting and wonderful. She said had Ryan picked her to ask a question, she would’ve instead complimented him on his debate performance.

A quadriplegic, she said she went to rest under an overhang during the event, but she could hardly hear Ryan speak over the Obama crowd’s chants. She said she still respects the crowd’s right to protest Ryan and found the event accommodating aside from the heat.

“If they feel the government should run their lives, then that’s their prerogative,” she said.

She said she supported the Romney and Ryan ticket because she thinks they can help the country’s future. She said the many empty, for-sale and for-rent houses in Ocala concern her.

“I believe that’s going to help America get right on track,” she said. “I’m ready for the people to run the government again.”

Denise is a reporter for WUFT News and can be contacted by calling 352-392-6397 or emailing news@wuft.org.
Previous Mouse holds genetic key to regeneration
Next Locals partnering up to grow food for those in need