The Blue Trees exhibit comes to University of Florida

The trees on University of Florida campus may be turning blue, but the idea behind this unusual artistic statement is green.

Starting today, the University of Florida will be hosting “The Blue Trees,” an art exhibit created by Australian sculptor Konstantin Dimopoulos.

The exhibit will have different trees all around campus painted blue with a tree-safe colorant made from calcium carbonate and ultramarine blue, according to the exhibit’s UF website.

Dimopoulos said in an email that the purpose behind the exhibit was to bring attention to deforestation.

“Through the use of art I wanted to create a work that has a surreal effect, and to get people aware that although urban communities are passionate about their own urban forest, the majority of the old growth forests are disappearing at an alarming rate,” Dimopoulos said. “‘The Blue Trees’ transforms a group of trees for a short period of time. So that people would see the forest I had to make the trees visible.”

Anna Heineman, the project director for the exhibit and a faculty member at the UF College of Fine Arts, said the exhibit was being brought to UF both as part National Arts and Humanities Month and in celebration of the 150th anniversary of the Morrill Land-Grant Act, which helped to establish the University of Florida.

Heineman said University of Florida Provost Joseph Glover was the one who made the final decision about bringing the exhibit to UF. She said he picked “The Blue Trees” in particular because the theme of the exhibit involved making other people aware of the environment.

There will be a welcome ceremony for the exhibit at noon on Wednesday behind the Reitz Union. Heineman said the dean of the College of Fine Arts, University of Florida Provost Joseph Glover and the artist, Konstantin Dimopoulos, would be speaking at the event. 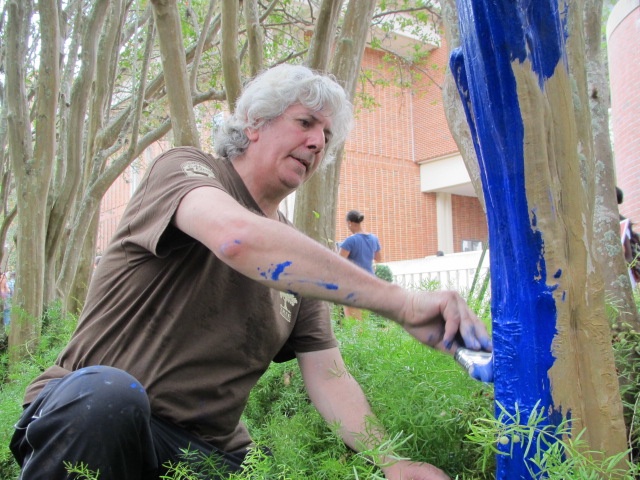 Australian artist Konstantin Dimopoulos paints a tree outside of the University of Florida Reitz Union as part of his “The Blue Trees” exhibit. Dimopoulos’s goal for the project is to make viewers take notice of trees that they would typically ignore and become more aware of environmental issues such as deforestation.

Heineman said the exhibit will last six to nine months, which is the natural amount of time it will take the coloring used on the trees to be washed away by the weather.

Heineman said that besides just painting the trees blue, there would be another element to the exhibit in the form of signs in front of the trees. These signs will give viewers instructions to access a cell phone tour that will inform them about the different species of trees that have been painted. Heineman said that these tree species include drake elms, cabbage palms and maple trees.

Students from the University of Florida are also getting involved with the exhibit. Students who are members of UF’s Painting and Drawing Association and the UF Environmental Horticulture Club will be helping Dimopoulos to paint the trees this week.

“He’s the creative vision on this and we are literally extra sets of hands to help with the process,” said Noel Kassewitz, the president of UF’s Painting and Drawing Association.

Kassewitz said members of the club first heard about the exhibit through either their teachers or through Heineman.

Kassewitz said getting involved with the project was worthwhile, since it centered on a message of ecology and conservation, and it offered a chance to meet a dynamic individual. 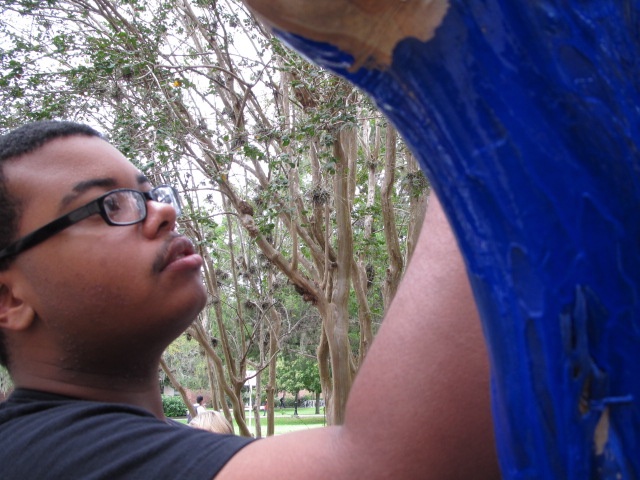 Joseph Jordan, a 21-year-old wildlife ecology major at the University of Florida, paints a tree for “The Blue Trees” exhibit. Jordan had just walked out of his GIS class when he saw volunteers painting trees outside of the Reitz Union. He decided to stay and help with the painting after hearing what the theme of the exhibit was. 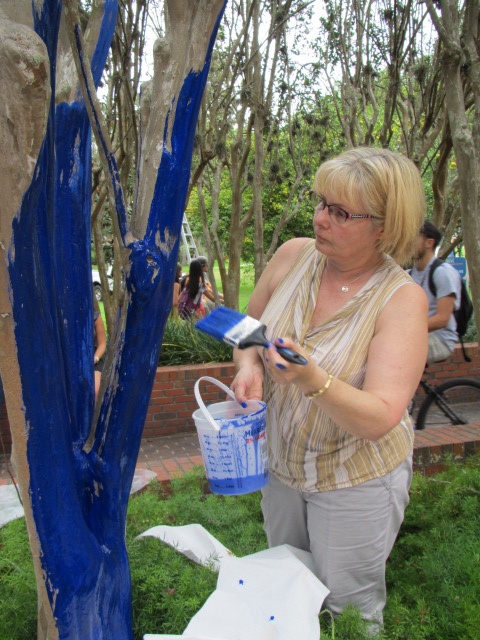 Adele Dimopoulos, the wife of artist Konstantin Dimopoulos, helps her husband paint trees outside of the Reitz Union on Monday afternoon. 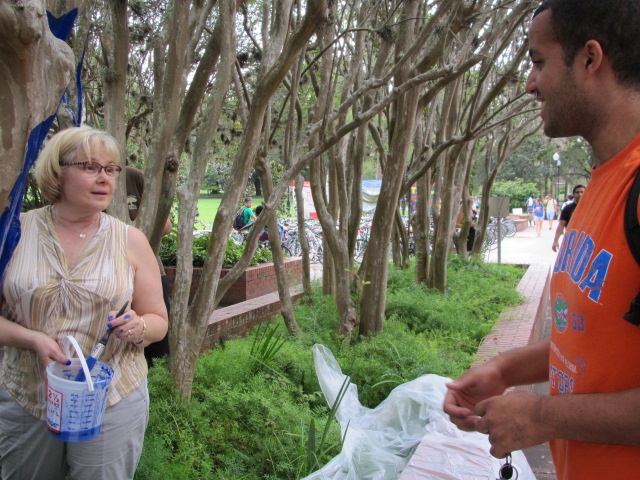 Adele Dimopoulos speaks with James Worthy, an 18-year-old UF student. Worthy had not heard about “The Blue Trees” exhibit beforehand and was surprised to see trees being painted on campus. Dimopoulos explained that the theme of the exhibit was to make people more aware of the threat of deforestation.

“It’s a terrific opportunity as a student to be able to meet an internationally known artist,” she said.

Paige is a reporter for WUFT News who may be contacted by calling 352-392-6397 or emailing news @wuft.org
Previous Man who fled trooper found hiding
Next Memorial service to be held in Gainesville for Christian Aguilar