Victor Yengle, once an “undocumented immigrant” himself, devotes his spare time to helping others who feel the alienation of being labeled “illegal” in the country they know as home.

Those living in the country without legal permission and their advocates celebrated a step forward when when President Obama announced the Deferred Action for Childhood Arrivals program in June, which allows some to qualify to work and study legally in the United States for two years.

In an Aug. 30 amendment, however, these individuals were excluded from aspects of the Patient Protection and Affordable Care Act, often known as “Obamacare,” that would have helped them obtain more affordable health insurance.

Yengle, an economics senior and president of CHISPAS at UF, a student organization  supporting the immigrant community, views this amendment as perpetuating the alienation that they already feel.

“We used to say ‘we’re not from here nor from there,’ because we live here but we don’t have all of the rights,” he said. “Yet to our friends back there, we’re Americans.”

But it’s about more than just alienation for Yengle, who says he has met people who use tooth-numbing cream instead of going to the dentist and who “suck it up” and deal with their medical problems until they end up in an emergency room. The insurance benefits would have helped relieve some suffering.

Instead, he said, the Obama administration passed an amendment that was politically motivated and indicative of “our broken immigration system.”

“It makes total sense because now he can garner more support, but it’s not actually fixing the problem,” Yengle said. “It’s important for us to be aware that deferred deportation is not the solution. It’s only the first step.”

The emergency-only approach to health care is common among those who cannot afford health care or insurance, whether they are documented or not. But those who qualified for the childhood arrivals program could have had the opportunity to obtain more-affordable health insurance.

As of Aug. 28, though, those who qualify for deferred action under the program do not qualify as “lawfully present” as defined by Medicaid.

This means they will not be eligible for premium tax credits or cost-sharing reductions offered by the Affordable Care Act, both of which start in 2014.

Under a Department of Health and Human Services ruling, other immigrants who are granted deferred action do qualify. It is only those who receive deferred action under the childhood arrivals program who are specifically excluded.

In effect, they will work legally, receive a Social Security number and pay federal income tax, but they will automatically be excluded from health insurance coverage under the Affordable Care Act.

Steve Willis, a UF law professor, said the Affordable Care Act, and especially the pre-existing condition plan will be expensive and that the burden will fall on citizens. Because deferred action does not confer citizenship, he does not think that people here under the new program should be entitled to those benefits.

“From a legal standpoint, I don’t see what fairness has to do with,” he said.

Willis, who said he views the Affordable Care Act as unconstitutional, thinks that states could opt to provide health care alternatives such as Louisiana’s charity hospitals, but that the federal government should not be involved.

“I can’t pay for the whole world,” he added. “If we’re going to let people stay here, don’t make me pay for them too.”

While the childhood arrivals program grants immediate relief in the form of legal work and study, the health care amendment has discouraged many.

“I know the politics involved, but when it comes to lives and health … politics should be set aside,” said Eric Castillo, director of UF’s Institute of Hispanic-Latino Cultures. “Health care is such a huge issue plaguing undocumented folks. At this point, many of them don’t have insurance, so this could have been a point of intervention.”

Castillo said that it’s too soon to tell what effect the childhood program will have for students at UF, as students are just figuring out whether they qualify.

Sara is a reporter for WUFT News who may be contacted by calling 352-392-6397 or emailing news @wuft.org
Previous Williston residents, visitors celebrate peanuts during festival
Next Ten little-known facts about Columbus Day and its namesake 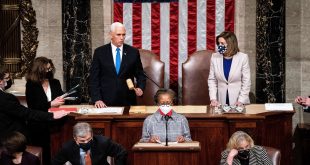 House To Vote On 25th Amendment Resolution Against Trump

The House of Representatives is expected to vote Tuesday on a resolution calling for Vice President Pence to invoke the 25th Amendment against President Trump.