Vicky McIntyre’s debut as a center of the University of Florida women’s basketball team will be bittersweet.

The season opening game falls just a week prior to the first anniversary of a tragedy in the McIntyre’s life — the day when she lost her coaches.

The former Oklahoma State University player said her life was turned upside down after she heard about the plane crash Nov. 17, 2011, that killed the women’s basketball head coach Kurt Budke, assistant coach Miranda Serna and two others.

The coaches were heading to a recruiting trip in Arkansas the day before when the plane went down in a wooded area. The plane’s pilot and his wife also died in the crash, according to GatorZone.com.

For the Oklahoma State team and McIntyre, it was only the beginning of a difficult road ahead.

McIntyre struggled her sophomore season as her emotions often got the best of her. Averaging 11 points and nearly 6 rebounds her freshman year, McIntyre’s numbers dropped tremendously in her second season.

She averaged just 4 points and 4 rebounds a game. She faced many personal challenges, including boarding a plane when the team traveled to a tournament in Reno, Nev.

After the season, McIntyre decided she needed a fresh start.

The National Collegiate Athletic Association passed a waiver for her to play immediately this year due to her unusual circumstances. Once she visited Gainesville, she knew she wanted to start the next chapter of her basketball career at UF.

Standing in at 6-foot-7, McIntyre will be the tallest women’s basketball player in Florida history.

McIntyre said UF head coach Amanda Butler and her teammates have welcomed her from the beginning. While McIntyre is excited for her start as a Gator, she still works hard every day to honor the memory of her late Oklahoma State coaches.

Vicky McIntyre will take the hardwood with her new team for the first time Nov. 9th in the O’Connell Center when the Florida Gators plays Fairfield University.

Kyle is a reporter who can be contacted by calling 352-392-6397 or emailing news@wuft.org.
Previous Pork shortage rumors have some squealing
Next Students vote on referendum to change name of Reitz Union 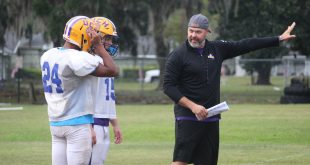 Nestled deep in North Florida, the Union County Tigers were preparing for one of the …