Mark Johnson turns his attention to the banjo when he isn’t busy coordinating safety procedures and provisions in his office as Levy County’s Director of Emergency Management. The twangy five-stringed instrument has been his hobby since he was 14. 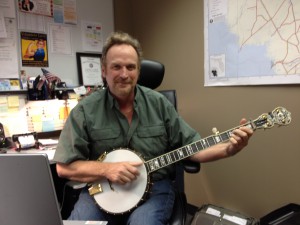 Levy County’s Director of Emergency Management Mark Johnson poses with his banjo. He is set to play on “The Late Show” with David Letterman later this month.

Johnson was a nominee for Instrumental Album of the Year by the International Bluegrass Music Association in Nashville in 2007. He’s adapted his own playing style over time, a blend of bluegrass and clawhammer picking to form a new breed of banjo music that he calls “Clawgrass.”

Now he’s being honored for his musical innovation.

Johnson is a 2012 recipient of the Steve Martin Prize for Excellence in Banjo and Bluegrass, which is named after the famed actor and comedian. Martin, a banjo enthusiast and fellow musician, is in his third year of handing down the $50,000 award.

Johnson and Martin will appear on “The Late Show” with host David Letterman this month, where the two will also give a live performance.