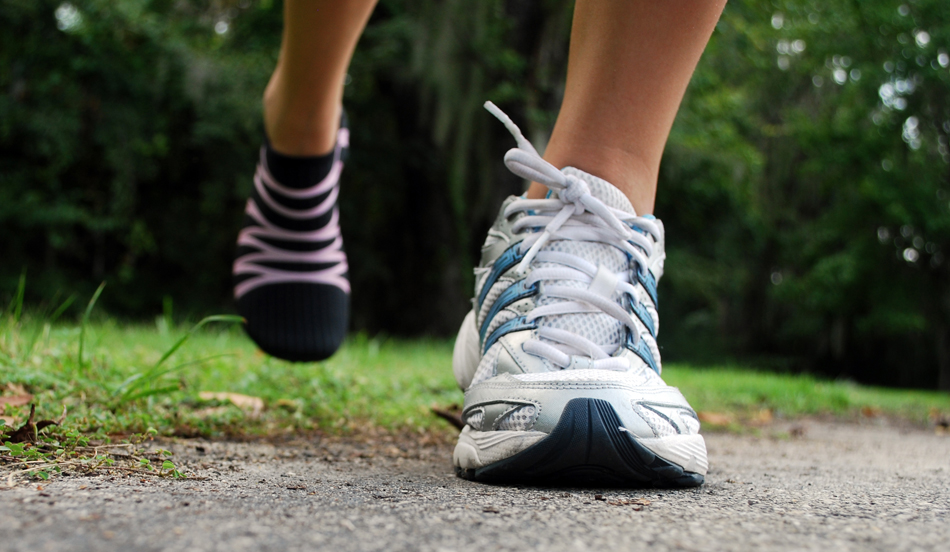 Running injuries have increased because runners often fail to adapt their running technique after changing footwear types and because they take the transition too quickly, according to Heather Vincent, director of UF’s Human Performance Laboratory and the Sports Performance Center.

Runners who prefer running barefoot or with minimalist shoes often say that their running style gives them greater efficiency and is better for their joints.

Fans of cushioned shoes offer up the same reasons for their preference.

Runners on both sides of the debate argue their opinions, but their arguments are mostly based on personal experience and assertions that haven’t been researched.

Nonetheless, running barefoot or in minimalist shoes is a trend that has allured athletes, many of whom learn what they know from friends or a variety of Web sources – not all of which can be trusted. While there is scientific data out there, research in the area is relatively new, and much remains to be tested.

The rising number of injuries, such as metatarsal stress fractures, was one of the motivators that inspired Vincent and her colleagues to create a barefoot running study.

The study analyzed the kinematics of each runner, the calories spent and the oxygen used while the person ran barefoot versus with cushioned shoes.

Researchers are still analyzing data, but the report is starting to take shape, and already Vincent has been surprised by the results.

What they have seen is that, overall, there was no significant difference in caloric expenditure, oxygen use or running technique in a person’s barefoot run versus his or her shod run.

“That was kind of in contrast to what I expected,” Vincent said. “That was really surprising to me.”

Vincent had expected to find that barefoot running was more efficient in terms of calories and oxygen use. She speculates that the study’s participants were not the type of runners who would see improved results from switching to a barefoot run, and that maybe less-seasoned runners would benefit more.

To participate in the study, runners had to have a mid-forefoot strike, run an average of 20 miles per week and have no acute injuries affecting legs, hips or back. Vincent said they used a group of fairly homogeneous runners to limit the factors that could influence the variables.

“It’s hard to design a study that is experimentally sound and that has meaning,” she said.

The purpose is to have scientific data to guide the advice Vincent and her colleagues give to injured runners. As a result of the study, their advice will explain that they observed no increase in efficiency from one running style to another, but that the choice to run with or without shoes is up to personal preference. Most of all, though, they stress injury prevention.

What’s most important, Vincent says, is that runners are aware of their legs and feet. If they want to switch to bare feet or minimalist shoes, they need to consider how they run – landing on heels or with legs extended far in front of the body — rather than underneath it — can cause injury.

While Vincent says she doesn’t condone one type of running or one type of shoe over another, she does think it’s a good idea for people to spend more time barefoot or in minimalist shoes.

“They’re a good way to keep your feet strong and in tune with what’s going on on the ground,” she said.

But everyone is different, and there is no perfect way, she added.

Jeannie Mader, 23, a physical therapy graduate student, was never formally trained to run, but she runs an average of 15-30 miles per week, depending on how close she is to a race she wants to participate in.

The importance of formal training has been called into question recently by a study conducted by the Bioenergetics and Human Performance Research Group at England’s University of Exeter.

The Well blog on The New York Times’ website reported that the study analyzed the movements of 10 untrained women who had just joined a running group, and it found that, as the women ran more and more, they unconsciously changed their running gaits in ways that made them more efficient runners.

Similarly, a study co-authored by Daniel Lieberman, Harvard University professor of human evolutionary biology, and published in the international journal Nature in 2010 found that most people adopted a mid to forefoot strike when they switched to barefoot running, which is safer for the joints.

“We go with what feels good, and that’s just human nature,” Vincent said.

Mader hasn’t participated in any running studies, but she has tried both types of running. She doesn’t prefer going barefoot.

“It activates different muscles, and it challenges your calf muscles a bunch more,” Mader said. “So I think it’s a personal preference on what exact muscles you want to target.”

Cushioned shoes give her more comfort and help her run farther, she said. She also thinks they help her joints by absorbing some of the shock of the impact.

She did suffer pain last year, a result of her femur and patella, which are located in the lower leg and knee, grinding together. She was able to correct the pain by strengthening muscles in her hip area.

Although there is much research still to be done on the effects of barefoot running, the study published in Nature argued that cushioned shoes make it easy for people to run with the high-impact heel strike that is characteristic of bipedal walking. But a heel strike is not as safe for running.

This shows that runners at least need to be aware of how their feet are striking the ground.

Until substantially more study results are published, the debate over which style is better overall will run on. 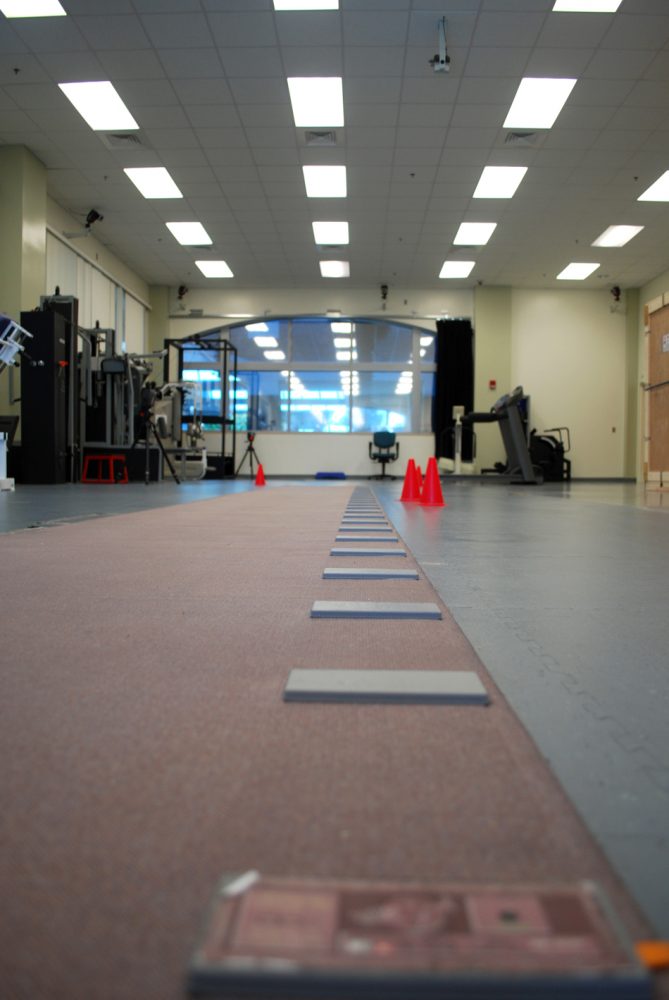 Researchers at UF’s Human Performance Laboratory and the Sports Performance Center will soon release a report comparing the effects of running with traditional sneakers or minimalist shoes. 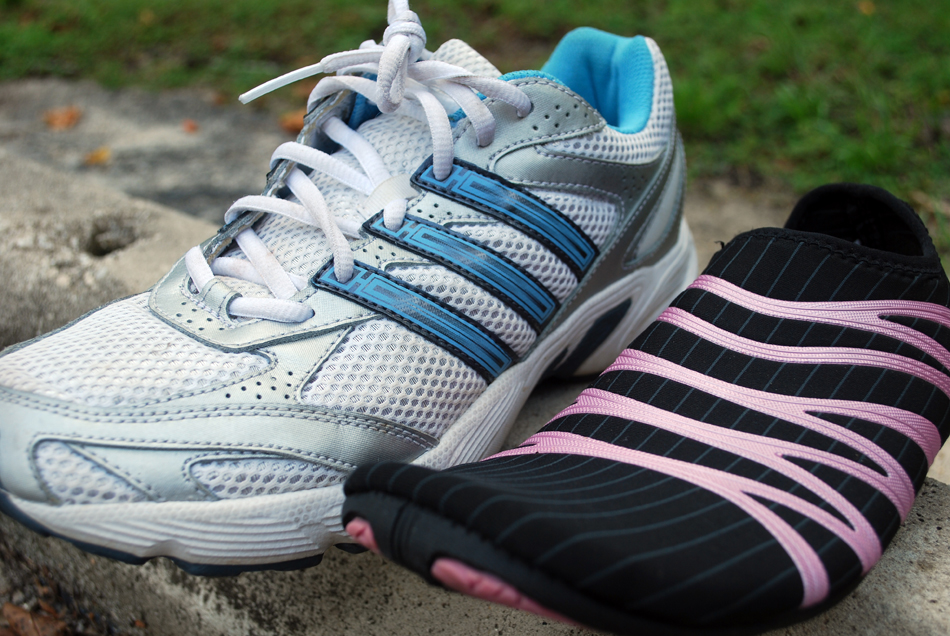 Sara is a reporter for WUFT News who may be contacted by calling 352-392-6397 or emailing news @wuft.org
Previous Florida DNC Chairman previews President Obama’s acceptance speech
Next Gator Clubs to welcome fans to Texas