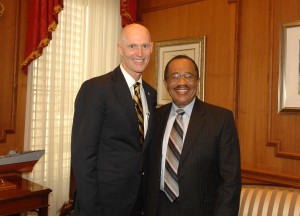 In a statement released late this afternoon, Florida Governor Rick Scott has announced who will replace Rodney Long as Alachua County Commissioner.  Winston J. Bradley will take over the seat vacated by Rodney Long who resigned a few months ago.  71 year old Bradley has been the pastor of  Kingdom Life Ministries since 2005.  He previously was an agency owner with Allstate Insurance Company from 1978 to 2000. He has served on the Santa Fe College Board of Trustees since 1998 and the Santa Fe College Endowment Board since 1999. He is also a past member of the Gainesville Housing Authority Board and the Eighth Judicial Circuit Grievance Committee. Bradley served in the United States Air Force from 1964 to 1968 and received a bachelor’s degree from Bethune-Cookman College.  Bradley will serve until November 19, 2012.