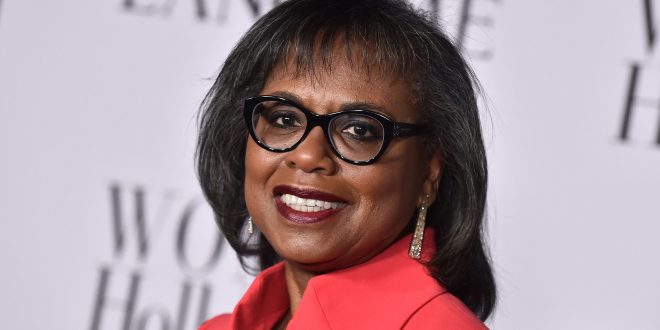 Anita Hill Started A Conversation About Sexual Harassment. She’s Not Done Yet

In 1991, attorney Anita Hill testified that Supreme Court nominee Clarence Thomas had sexually harassed her when he was chair of the Equal Employment Opportunity Commission and she worked there as an adviser to him.

Hill’s testimony was unlike anything heard before at a Supreme Court nominee hearing. A committee of 14 white men, chaired by then Sen. Joe Biden, grilled her in a televised live hearing.

The Senate ultimately confirmed Thomas’ nomination in a 52-48 vote, and Hill went home to a new life, condemned by many and facing death threats. Nevertheless, she has no regrets about stepping forward.

“I had important information about an individual who was picked to sit for a lifetime appointment on our country’s highest court,” she says. “It was not just a professional duty as a lawyer, but I believed it was my ethical responsibility to come forward in the best way and the most effective way that I could — and that’s what I did.”

At the time of the hearing, Hill felt isolated. But afterward she was flooded with stories of other people who had similar experiences.

“Hearing from them, just realizing that I was not alone in facing this kind of scrutiny and actual hostility, was affirming,” she says.

Hill’s testimony against Thomas — and the process by which nominees to the Supreme Court are vetted — were reexamined in 2018, when Brett Kavanaugh was confirmed to the Supreme Court despite Christine Blasey Ford‘s allegations that he had sexually assaulted her in 1982.

Hill’s new book, Believing, draws on her own experiences, as well as the stories shared with her by victims of sexual harassments and assault. She writes about laws related to gender-based violence and suggests how the Supreme Court confirmation process might be changed so that when women like her and Ford come forward, their allegations are fully investigated.

“Thirty years later, I’m here to say that even though Clarence Thomas was confirmed, I do believe that what I did was effective because it opened the conversation publicly in a way that had never been done before,” she says. “I’ve heard from people whose lives have been changed because that conversation was open.”

It’s very, very hard to to sum up all the ways that my life has changed since 1991. I’ve changed my career. I’ve changed my location. I’ve actually changed my focus of work, outside of teaching, from sexual harassment in the workplace [and] employment discrimination … I’ve expanded it to include other forms of gender violence, because I realized through interacting with victims and survivors that of all kinds of violence that are pervasive in this country that there is this interconnection between sexual harassment and, say, intimate partner violence, incest. I’ve heard from incest survivors, [survivors of] sexual assault and rape, street violence. All of [those] things … are part of what I’ve been working on since 1991.

On addressing the systemic problems that made Justice Thomas’ appointment possible

My concern is about the systemic problems that exist in protecting people who commit gender violence or misconduct. And so what I really want to focus on is, where is the process that we need to be in place that will fully vet judges and Supreme Court justice nominees? … We have a process right now, as evidenced in 1991 and in 2018, that really is nonexistent. … I’m not even sure we can call it a process. Neither Christine Blasey Ford nor I knew where to go with our complaint. A process, an effective process, would have clear guidelines about where an individual should go if they have information about a nominee. That didn’t exist in 1991, and it doesn’t exist now, as far as I know.

I remember one episode in particular where I was at home [on a] Friday evening, and I got a call from the dean of the law school saying that there was a bomb threat on my home. It just happened that that was a weekend where my mother, who was 80 years old and my sister and her three young children were visiting me, and we had to make a decision about evacuating the home, whether the threat was so clear that I needed to evacuate.

There were other vulgarities that came through in the mail, terrible, nasty materials. I’m talking about physical excrement, human excrement, I suppose. I don’t know exactly what it was, but it came through the mail. Those threats that happened in 1991 were mostly in the mail. There were threats on the telephone. But I suppose today what happens is, with all of the social media and the different platforms for threatening folks, that the threats are actually even more vivid and more pervasive today for witnesses coming forward. We have not stopped that, and the uncertainty that’s created by the systems that we have in place really helps fuel that.

I think what people don’t understand is that there is a before-[the-hearing], during-the-hearing, and after-the-hearing problem. And what I think people assumed in my case, and perhaps in Christine Blasey Ford’s case too, was that we just went home and everything was back to normal and nothing could be further from the truth, for each of us. What we need and what was really lacking was that the senators held this hearing, which put us really at risk of public blowback, but then offered nothing in terms of resources or guidance or statements to the effect that when we step forward, we were doing something that it was that was our right to do, and was, in fact, our civic duty to do to bring evidence to the Senate Judiciary Committee.

I got my call from Joe Biden as he was poised to announce his candidacy, and what he said was that he was sorry for what had happened to me in 1991. … He also said that, since 1991, he had been involved in efforts to protect women from violence, including the Violence Against Women Act, including action while he was the vice president in the Obama administration around violence on college campuses. There was a campaign that he was in charge of from the White House that engaged college students. Those were things that I was very grateful to hear him talk about.

What I didn’t hear him say was that he clearly understood how his handling of the 1991 hearing had impacted people beyond me. I didn’t hear that in his apology that he understood that the Senate Judiciary Committee’s handling of my complaint in 1991 had been harmful to women throughout this country. He thought the affront was a personal affront to me, but it was really affront to all individuals who have had complaints and want to come forward and want the certainty or some kind of assurance that they can come forward and be treated fairly. It appeared to women as a model of how they could be abused by a system and that nothing would be done about it. It wasn’t just the outcome of a confirmation or a vote, but it was the whole process that people found offensive to their sense of what the government has a responsibility to do to hear victims.

It’s never too early to start on this. When you look at the numbers themselves, just look at the numbers, the prevalence of the problem …. three of the last five U.S. presidents and two sitting Supreme Court justices have been accused of abusive behavior. The fact that we have the problem that is occurring regularly, almost every year, there’s a new scandal in our military, then that the U.S. Civil Rights Commission has done work recently to discover that there is a problem in our federal workforces and that’s just the government alone. Then when you look at the private institutions, we realize that this is a problem that is systemic, that is pervasive, and that we need some leadership to address.

My faith in courts is still strong. Courts have an important role. I still think that the [Supreme] Court, though, is weakened when individuals on the Court are weak, and that’s why I think it’s so important for us to get these processes right, so that we can, in fact, get the best, most credible people on the Court. At the very least, we can do that.

Sam Briger and Kayla Lattimore produced and edited the audio of this interview. Bridget Bentz, Molly Seavy-Nesper and Meghan Sullivan adapted it for the web.

2021-09-28
Share
Previous Syrians Have Stared Down Threats To Testify Against Assad’s Regime In A Landmark Trial
Next Women Are Barred From Attending Kabul University For Now, Says The School Chancellor