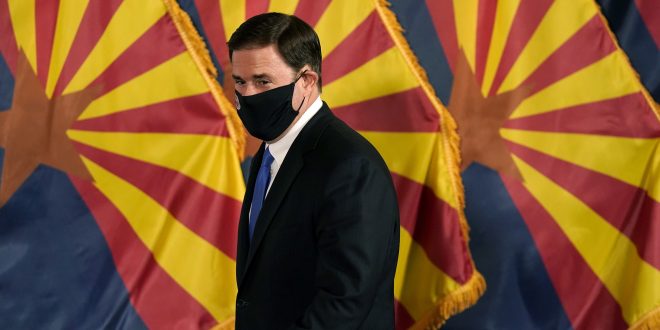 An Arizona judge ruled that a ban on public school mask mandates, as well as a variety of other laws shoehorned into the state budget by Republican lawmakers, is unconstitutional.

The ruling frees public school leaders across Arizona to require students, staff and visitors to wear masks on campus. The law banning that authority was scheduled to take effect on Wednesday.

A host of other policies adopted as part of the budget are also voided, including a ban on vaccine requirements for public universities, community colleges and local governments, anti-fraud measures for ballots and a ban on teaching critical race theory in public schools.

All of it, Maricopa County Superior Court Judge Katherine Cooper wrote, is unconstitutional and unenforceable.

“The issue here is not what the Legislature decided but how it decided what it did,” she wrote.

Cooper cited two rules in the Arizona Constitution to support her ruling. One states that a bill can only tackle one thing, or one single subject, at a time. When it comes to the budget, the subject is clearly supposed to be how to spend taxpayer dollars, Cooper wrote. Another constitutional rule requires bills to be given a title that accurately reflects the content of the bill.

In four budget bills, Republican state lawmakers violated at least one, or in one case, both of those rules, Cooper wrote.

That one case included what Cooper described as an “array of provisions are in no way related to nor connected with each other or to an identifiable ‘budget procedure.’ ”

The 55-page Senate Bill included policies that stripped the Democratic secretary of state of the authority to defend, or choose not to defend, Arizona election law; a broad preemption of local COVID-19 mitigation requirements for private businesses; a special committee to receive reports from a widely-criticized, GOP-led review of the 2020 election in Maricopa County; and time limits on a governor’s declaration of a public health emergency.

“The bill is classic logrolling – a medley of special interests cobbled together to force a vote for all or none,” Cooper wrote.

She rejected arguments from the state’s attorney, who said the legislature has broad authority to interpret what policies fit under the title of a bill and what qualifies as the “single subject” a bill can deal with.

Through a spokesman, Republican Gov. Doug Ducey called the decision “an example of judicial overreach.”

“Arizona’s state government operates with three branches, and it’s the duty and authority of only the legislative branch to organize itself and to make laws,” spokesman CJ Karamargin said. “Unfortunately, today’s decision is the result of a rogue judge interfering with the authority and processes of another branch of government.”

Cooper addressed claims of overreach in her ruling, noting that she didn’t address the policies Republicans sought to enact, but whether lawmakers followed constitutional mandates when writing and voting on those laws — an issue the courts have a history of determining, she wrote.

The state school superintendent, Kathy Hoffman, a Democrat, praised the ruling as a welcome harbinger of change to the legislative process in Arizona, where Republican legislators routinely leverage their votes for the budget in exchange for something in return — in this case, substantive policy changes that Cooper ruled have no businesses being included in the budget.

Hoffman described the Republican standard operating procedure as “an assault on the democratic process,” and urged the state to let the ruling stand.

“While some will likely want to challenge today’s ruling, our school communities are tired of being political pawns in dangerous attempts to subvert democracy and ignore science,” Hoffman said.

In August, he announced grants to boost per-pupil funding in public and charter schools, but only for schools that make masks optional and keep classrooms open for in-person learning. Ducey is also offering families who want to opt out of school mask mandates vouchers to cover private school tuition. Those programs are funded by federal COVID-19 relief funds.

2021-09-27
Share
Previous ‘Fireball’ Meteor Caught On Camera Soaring Over North Carolina At 32,000 MPH
Next North Korea Has Fired A Short-Range Missile Into The Sea In Its Latest Weapons Test