Mexico's president has ordered the release of potentially thousands of prisoners from federal custody. Among the reasons for the early release is that some prisoners were tortured.

Mexico To Release Potentially Thousands Of Prisoners From Federal Custody

2021-07-29
Share
Previous After Quickly Expanding, The Economy Is Expected To Slow
Next Tokyo’s Coronavirus Cases Are Soaring, But Japan’s PM Says The Games Are Not To Blame 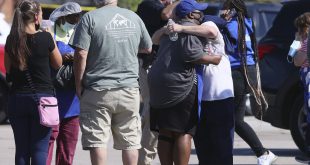 13 People Were Shot, 1 Killed, At A Tennessee Kroger Store. The Suspect Is Dead

Education Dept. Will Reimburse Florida District That Had Funds Held Over Mask Mandate

IATSE, a union which represents film crews, has asked their members to grant them the authority to strike. Conditions have worsened in the pandemic for people who work on sets for film and television.