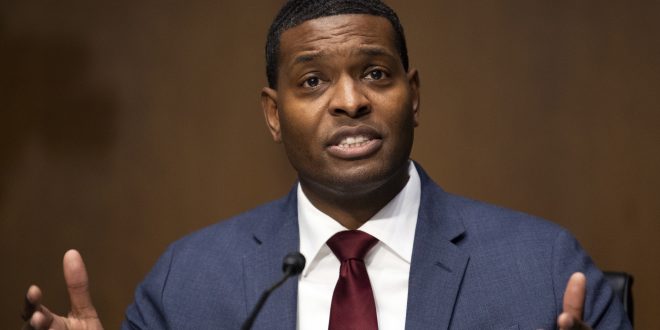 EPA Administrator Michael Regan says the nation’s water infrastructure has been neglected for decades and is “increasingly becoming more vulnerable.”

It needs to be “stronger and more resilient to face the climate change impacts that we are seeing right here right now — impacts to our wastewater treatment facilities, stormwater infrastructure to help reduce flooding,” Regan says in an interview Thursday with NPR’s Morning Edition.

Biden’s plan includes $56 billion to modernize water systems around the country and $45 billion to replace the nation’s lead water pipes, which include those that bring water to an estimated 6 million to 10 million homes.

Regan notes that lead exposure is “a serious public health issue — especially on our children, where we can see irreversible and long-term health effects, including decreased IQ, focus and academic achievement.”

“So through the American Jobs Plan [the infrastructure bill], we will not only tackle public health concerns like this, but it creates good-paying jobs and helps to build a stronger economy,” he says.

Reducing carbon is key to countering climate change, and energy markets are already shifting away from heavy carbon-producing sources such as coal toward natural gas and renewable energy sources such as wind and solar.

“Markets are driving this conversation. Technology has caught up to the conversation,” Regan says.

“We have to lessen our reliance on fossil fuels. There’s no doubt about that,” he says. “But we also have to spur technological growth that not only reduces or eliminates the emissions, but possibly captures the emissions. It’s an all-hands-on-deck approach. And so what we want to do is work with our business community, our entrepreneurs, our technology innovators.”

Regan previously was North Carolina’s environment secretary and worked in the EPA in the Clinton and George W. Bush administrations. He says it was “painful to watch the agency from the outside” as former President Donald Trump attempted to change the EPA.

“So, morale was low. But let me just say that the staff here are resilient,” Regan says. “The energy level has increased. Staff are engaged. And what I’ve committed to is returning to scientific integrity, transparency, and the staff voices will be heard and will be a part — a major part — of the solutions that we propose to these complex challenges facing our country.”

Regan says he’s reviewing the decisions made under the Trump administration “to evaluate if science, facts and data were properly applied and where they were not, we will reverse course.”

$25 Million Worth Of Giant Clam Shells Seized In The Philippines