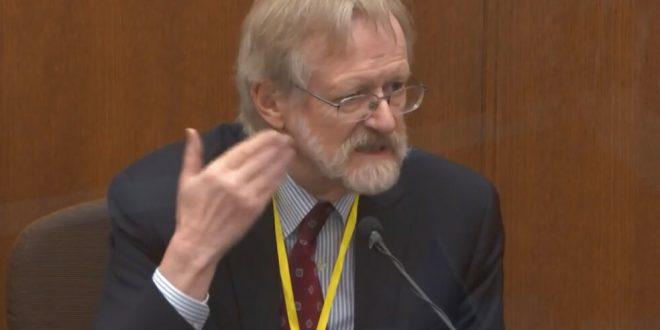 Tobin is appearing as an expert witness for the prosecution. He said the state asked him to review documents and videos depicting the circumstances of Floyd’s death. Tobin watched some of those videos hundreds of times, he said.

“Have you formed an opinion to a reasonable degree of medical certainty on the cause of Mr. Floyd’s death?” prosecutor Jerry Blackwell asked.

“Yes, I have,” the doctor replied. “Mr. Floyd died from a low level of oxygen, and this caused damage to his brain that we see. And it also caused a PEA [pulseless electrical activity] arrhythmia that caused his heart to stop.”

Prosecutors say Chauvin killed Floyd by pressing his knee on Floyd’s neck for about nine minutes. But Chauvin’s attorney says that Floyd was experiencing a drug overdose and had an underlying heart condition.

Last year, the Hennepin County medical examiner’s office ruled Floyd’s death a homicide, saying his heart and lungs stopped functioning “while being restrained” by police. But it also noted “other significant conditions,” including fentanyl intoxication and recent methamphetamine use as well as heart disease.

“All of these four forces are ultimately going to result in the low tidal volume, which gives you the shallow breaths” that can’t effectively bring oxygen into the lungs, Tobin said.

Tobin says that using his clinical skills, he was able to calculate Floyd’s respiratory rate at 22, noting that in a roughly 19-second span of a police video, Floyd is seen breathing between seven and eight times as he lies on the street.

“It’s extremely significant,” the doctor said, “because one of the things in this case is the question of fentanyl. If that opiate was affecting Floyd, he said, it would have dropped his respiratory rate to around 10 breaths.

Asked by the prosecutor if he saw a depressed breathing rate in Floyd, Tobin replied, “No. It’s normal.”

Prosecutors say Chauvin and two other officers restrained Floyd for nine minutes and 29 seconds before he was moved onto an ambulance gurney. Chauvin kept his left knee in the area of Floyd’s neck “for the vast majority of the time” as three officers held Floyd down on the asphalt, Tobin said.

His analysis was helped, he said, by an artist’s computer rendering of the scene created by all the available video sources. Tobin said he focused on the first five minutes and three seconds of video, because “that is up to the time that we see evidence of brain injury.”

Chauvin’s right knee seems to have alternated between resting on Floyd’s back and on his arm and “rammed into Mr. Floyd’s left chest,” Tobin said. He said that both placements would have an “extremely similar” effect on someone’s ability to breathe in the position Floyd was in.

Tobin told the jury that the officers made it harder for Floyd to breathe when they pushed the handcuffs into Floyd’s back and raised his wrists higher as he lay on the street.

“It’s like [Floyd’s] left side is in a vise. It’s totally being pushed in, squeezed in from each side,” he said, clasping his hands tightly together to illustrate his point. The effect directly interfered with Floyd’s ability to breathe and rendered his left lung almost entirely unable to operate, Tobin said.

Floyd resorted to trying to lift his right shoulder to help get air into his lungs, Tobin said, referring to images from a bystander video. But he said, “The shoulder is a very ineffective way of breathing,” adding that “it’s what you have to do when everything else is failing.”

Recordings from police body cameras have shown that Floyd told officers, “I can’t breathe,” nearly 30 times as they restrained him. At one point, Chauvin is heard telling Floyd to stop talking, because “it takes a heck of a lot of oxygen.”

In court, Blackwell asked Tobin whether it’s true that if someone can talk, they can breathe. Tobin replied that it is true, but he warns that it can give people a false sense of security.

“At the moment that you are speaking, you are breathing,” he said, “but it doesn’t tell you that you’re going to be breathing five seconds later.”

As Floyd struggled to breathe, Tobin said, he eventually pressed his own forehead, nose and chin into the asphalt, attempting to “crank up” his chest to let air in. But as Floyd turned his head on its side, Tobin said, Chauvin’s knee moved farther toward the side of Floyd’s neck, compressing his hypopharynx. Anyone experiencing that type of compression would find it “enormously more difficult to breathe,” Tobin said.

As a courtroom display showed a still image of Chauvin holding his knee on Floyd, Tobin noted that the toe of the officer’s boot was entirely off the ground.

“This means that all of his body weight is being directed down at Mr. Floyd’s neck,” he said.

During his testimony, Tobin led the court through anatomy lessons about how the airway is structured and how the lungs operate. Several times, he instructed jurors to place their hands on their own necks to illustrate the areas he was describing. Judge Peter Cahill instructed the jury that they could follow Tobin’s motions, but were not required to do so.

Because Floyd continued to speak for the first nearly five minutes of being held down, Tobin said, “We know that his oxygen levels were enough to keep his brain alive” during that time.

But shortly after the five-minute mark, Tobin said, Floyd’s leg can be seen moving, seemingly involuntarily.

“That is when he has suffered brain injury,” the doctor said. “We can tell from the movement of his leg that the level of oxygen in his brain has caused what we call a myoclonic seizure-type activity.”

After Floyd’s condition reached that point, Tobin said, Chauvin’s movement of his leg away from Floyd’s neck and airway would not have much of an impact.

Tobin said he’s aware that Floyd had pre-existing medical conditions. But he concluded, “A healthy person subjected to what Mr. Floyd was subjected to would have died.”

Tobin is a professor in the Division of Pulmonary and Critical Care Medicine at Loyola University Stritch School of Medicine, and is affiliated with Edward Hines Jr. VA Hospital, both in the suburbs of Chicago. He has written a highly regarded textbook on respiration and is a researcher in clinical medicine who has published hundreds of papers.

All of his work, Tobin told the jury, is related to breathing, including apnea. As Blackwell noted the doctor’s esteem in the medical community, Tobin said he has given lectures in more than 30 countries and most U.S. states.

Tobin testified as Chauvin’s trial enters a new technical phase, with prosecutors expected to call a string of medical experts to testify about how Floyd died in police custody. The former police officer is facing murder and manslaughter charges.

Tobin told the court he isn’t being paid to appear in the Minneapolis trial.

“When I was asked to do the case, I thought I might have some knowledge that would be helpful to explain how Mr. Floyd died,” Tobin said, “and since I’d never done this type of work in this nature before, I decided I didn’t wish to be paid for it.”