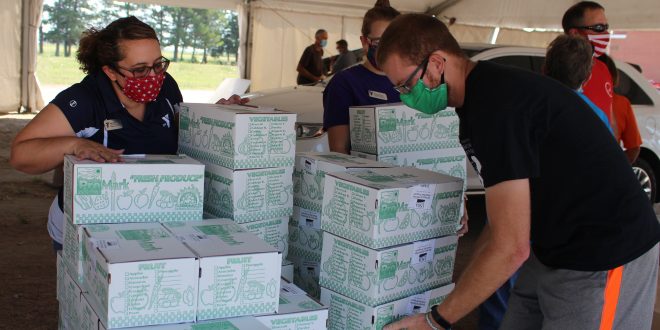 In Rural Nebraska, Combating Hunger From The Pandemic Is A Community Effort

Lexington, Neb., is just one of the many rural communities that has long dealt with food insecurity, but the global pandemic both intensified need in the town of 11,000 residents and presented new challenges in getting people food.

The nationwide hunger rate among small towns was 12.7% in 2018 compared to 10.8% in urban areas. And according to the national nonprofit Feeding America, 87% of U.S counties with the highest rates of food insecurity are rural.

It was no surprise to local nonprofits that COVID-19’s arrival in town — and its closures of local schools and businesses — would trigger a sharp spike in hunger. Nearly 16% of residents live below the poverty line.

Responding to the crisis presented its own series of logistical wildcards, but you wouldn’t know it by stopping at the town’s weekly USDA Farmers to Families Food Box distribution.

Since starting in June, the event has become a well-oiled machine. Each Thursday, local police cordon off several blocks near the edge of town, where roughly 700 cars will line up on their way to a white tent in the parking lot of St. Ann’s Parish.

She says the boxes have been a hit within the community. In just two months, the foundation has distributed 18,000. Most weeks, the food is gone within an hour.

“Sometimes it’s all lined up all the way to highway 30,” she remarked. “So there is definitely a need and it has increased since COVID.”

The good thing, she says, is how nutritionally diverse the boxes are. “They get one box of produce, a box of dairy, sometimes we get milk, and then one box of proteins,” Kopf said. “And it’s different every week.”

It’s not always easy to offer that in pantries, where refrigeration can be scarce.

Martha Draskovic, who’s managed the town’s pantry for a decade, says keeping any food stocked was a challenge at the start of the pandemic.

Her troubles started when local schools closed. Children at home and a sudden increase in unemployment made the perfect storm for a surge in demand. “It became clear when my shelves started going empty, so we kind of had to do a new game plan,” she said.

People who didn’t typically use the pantry or receive food stamps were suddenly in need.

“They weren’t eligible for the benefit,” she said. “But once they were home for two to three weeks, I mean, they were still out of income, but yet no food.”

Empty shelves weren’t the only hurdle. At the time, grocery supply chains across the country were faltering. The ripple effect reached Lexington in shortages of pantry staples.

“We were finding that different items are, like, the hot item of the week,” said Tammy Jeffs, who manages the Community Action Partnership of Nebraska’s community services division. “We had to figure out a way to get the quantity we need without making it so the rest of the town suffers.”

Jeffs says it’s common for rural grocers to have limited restocking schedules, and get just one truck per week for the entire town.

“If we go in and buy 40 packs of something and all the grocery store’s getting is 50 packs, you can definitely tip the need scale … you’ve now just sent everybody to your pantry because you bought everything,” she said.

Her team ended up on a wild goose chase across central Nebraska for bulk items like peanut butter and pasta. At one point, Jeffs says she purchased $4,000 in food from Amazon.

They also needed to rethink how they typically distribute items. Unlike previous local disasters like the floods of 2019, it was no longer safe to have residents come into the pantry.

Some groups were especially struggling to keep themselves fed, like seniors and workers at the local Tyson Foods meatpacking plant. According to the Two Rivers Public Health District, over 300 food processing workers in Dawson County have contracted COVID-19.

At the peak of Lexington’s outbreak in April and May, Draskovic says families were being quarantined with no way to feed themselves. She started delivering the food herself.

“At the beginning, I was like, ‘Well, I’m not gonna make a person come out, even though it is curbside,” she said. “So I just started taking them to their doorstep.”

Draskovic eventually needed to hire a part-time delivery driver to keep up with orders.

A town comes together

The peak in demand has dropped off, she said, and the pantry has been able to save a backstock in food in case Lexington is hit with another large outbreak. That’s due in no small part, she says, to an outpouring of support for the pantry by residents.

“We started getting different financial donations, items, businesses started reaching out,” she said. “And now we kind of have a backstock, so we’re kind of prepared to see if we get that second roundabout.”

Orthman Manufacturing, an agriculture equipment company with a plant down the road, is one of the local companies that helped get food to families in need.

Plant manager Scott McKelvey says many local nonprofit leaders or community advocates form a close-knit community. That worked in Lexington’s favor when organizations needed to mobilize quickly. In late spring, McKelvey called a friend at the local rotary club to bring Hot Meals USA to town, which has since served 18,000 meals to residents.

“I think with everything else that’s going on in the United States right now, this is a feel-good moment,” he said. “There’s these moments that are going on all over the country to help feed families in need.”

Plus, food distributions have never lacked volunteers. Sarah Mariel, who moved from Los Angeles to Lexington two years ago, felt she needed to help.

“As a community, we’re one,” she reflected. “And if anyone in our community is hurting, then it’s the responsibility of the ones who are not to step up.”

Mariel recently recovered from her own experience with COVID-19 that landed her in the hospital. After months in isolation, she says she missed her community.

“It needs to be taken seriously, but it doesn’t mean that it’s easy … in isolation, you’re obviously not connected,” she said.

A version of this story was first published by Harvest Public Media on Sept. 14, 2020. Follow Christina Stella on Twitter: @c_c_stella

Protesters were out for another night after police shot and killed Walter Wallace, a 27-year-old Black man, Monday. His family says they called for an ambulance for help with a mental health crisis.