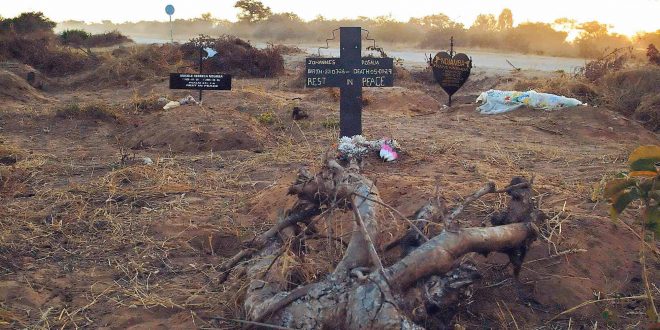 Why The Pandemic Could Change The Way We Record Deaths

It’s hard to keep track of the dead.

And even the records we do have are not accurate.

As the world approaches the 1 million mark for COVID-19 fatalities, public health experts believe the actual toll – the recorded deaths plus the unrecorded deaths – is much higher.

But that’s not just an issue with the novel coronavirus.

According to World Health Organization data, each year, two-thirds of global deaths are not registered with local authorities. That’s a total of 38 million annual deaths that aren’t part of any permanent record. Not only are the numbers not part of any global death tally, but the cause of death is also not recorded — leaving policymakers without critical information about population trends and health.

Now, that vast undercount of deaths might be changing — thanks to the virus. It’s pushed the science of death-counting into the international spotlight, highlighting the importance of strong and developed death registries.

“The pandemic has been a game-changer,” says Romesh Silva, a demographer working for the United Nations Population Fund. “It’s prompted the realization [among national governments] that comprehensive death registration is the most preferable way of understanding mortality.”

Public health experts agree: From the perspective of national planning, having good death data is imperative. You need good numbers to assess and understand risk factors that cause death. And to assess the success of health programs.

That’s why counting the dead and describing causes represent “the GPS” to better global health, says Dr. Prabhat Jha, an epidemiologist and the founding director of the Centre for Global Health Research. Without the numbers, he says, you’re flying blind.

Jha spearheads the seminal Million Death Study (MDS), an ongoing human mortality project rolled out in collaboration with the Registrar General of India — the country’s official unit for coordinating and unifying birth and death records. It began in 1998 to better understand and document causes of death in India, where the vast majority of deaths occur outside the official medical system. He says the paucity of reliable mortality data has posed a long-standing challenge to the development and implementation of timely and life-saving public health interventions.

But why the undercount?

Intuitively, it seems important that we understand something so fundamental as why people die. Turns out — it’s much easier said than done.

For one, deaths in the developing world are simply hard to count by virtue of where they happen. In lower-income countries, deaths often occur in rural areas far from hospitals. Individuals largely die at home, explains Jha, and deaths are largely unreported — so they’re never officially registered with local authorities, nor are the causes of death established and documented.

Researchers hypothesize that the undercount could also be due to cultural factors. Jha says in poor countries, incentives to record a death are often weak. In the West, those incentives often revolve around financial matters — proof of death is needed to open an estate and claim an inheritance. But many countries in the Global South follow informal ways of transferring assets, so families don’t have a huge reason to record a death. In many religions, getting a quick burial or cremation is considered tantamount — by the time proceedings are over, many miss the small window of opportunity to be able to report the information surrounding a family member’s death.

Just as individuals in lower-income countries may not be as rigorous about recording deaths, neither are governments. It’s hard to muster enthusiasm for what seems like the bureaucratic science of death registration and vital stats — which is why, on an international level, it’s been difficult to generate traction on death registration, Silva says. Especially for countries grappling with an array of health and poverty matters, shoring up support and funding for death registration has been a pretty hard sell, he adds. As Silva puts it: “vital statistics aren’t particularly sexy.”

The consequence has been a stagnation in the quality of death estimates and data collection, Silva says. In recent decades, commitment to civil registration and death registration systems has faltered for various reasons, resulting in limited progress in terms of mortality statistics.

This isn’t to note that some countries haven’t seen success, as quite the contrary is true. A handful have.

“Sri Lanka, for example, has been able to get pretty much all of the deaths, even those that occur at home, recorded,” Jha says. “[For decades,] they’ve used community doctors to try and get a diagnosis of the cause of death [in different areas].”

Furthermore, public health experts and population demographers have been on a quest to improve death estimates for years — piloting new systems and testing novel methods to get a better count of those who pass away. They’ve rolled out fleets of trained medical interviewers to conduct verbal autopsies in India and Sierra Leone, inquiring about deaths and relaying the information to a central body, and propelled similar efforts across Asia and Africa.

Even still, the World Health Organization says progress has been limited. As it stands, more than 100 developing countries still lack functioning systems that “can support efficient registration of births and other life events like marriages and death.” And globally, nearly 230 million children under the age of five are not registered, according to the same report.

Raising the stakes, death registration infrastructure is often weakest where need is most severe, Jha says. The largest gaps are in South Asia — India, Bangladesh and Pakistan — and in sub-Saharan Africa, precisely the places where premature mortality is the highest. In other words, though these nations face a disproportionate number of preventable deaths, they have much weaker systems to be able to report the causes of death.

‘Back-solving’ for a pandemic’s impact

Mortality figures hold humongous weight on their own for priority and policy setting. But they take on pronounced importance during a pandemic, says Srdjan Mrkić, chief of the United Nations Statistical Commission‘s (UNSD) demographic statistics section — especially for statisticians and public health experts. Liana Rosenkrantz Woskie of the Harvard Global Health Institute explains why: these figures offer a unique way to “back-solve” for the impact of the pandemic.

Unlike virus death totals, disease mortality rates or COVID-19 caseloads, national death statistics don’t rely on testing, which can vary significantly from country to country. By looking at excess mortality, or the number of deaths above and beyond what we would have expected to see under “normal” conditions in a particular time period, public health authorities and statisticians can make inferences about the scope and severity of the virus.

These inferences are key to rolling out an appropriate public health response — the number of health workers that should be deployed, or ventilators needed, or hospital strain to be expected.

The caveat is that for countries to use excess mortality as an effective measure, they need years of benchmark data to compare the new numbers to. And that’s a big if for most countries, mostly low-income, which have historically lacked the resources to mount strong civil registries and death reporting infrastructure.

Mrkić has been working alongside UNICEF and other members of the UNSD to follow up with a number of national governments to understand how their registries and death reporting strategies have been impacted by the virus.

The results were clear across the board: According to Mrkić, the COVID-19 pandemic has resulted in widespread disruptions to vital statistics collection — due in part to the sheer volume of new deaths and also international pressure for governments to produce timely mortality counts. But it’s also been a wellspring of innovation, as some nations have worked to scale up death reporting and take steps to modernize existing infrastructure.

At the start of the pandemic, Mrkić says the UNSD drew up a questionnaire that was dispatched to U.N. member states worldwide. The survey asked how countries were prepared to capture new deaths, record births and provide timely health data amid lockdowns.

The United Nations observed two clusters of national results: First, largely developed countries, for which the pandemic did not have an adverse effect on the functioning of civil registry; and also a cluster of low-resource countries, where the pandemic’s effects on counting deaths had been severe and negative.

In this second cluster of nations, Mrkić explains that families, fearing the virus, were often hesitant to bring a critically ill relative to the hospital, where deaths are legally required to be registered.

What’s more, in at least 15% of the countries, like Malawi for example, civil registry isn’t classified as an essential pandemic service — so some population bureaus and their services were scaled back altogether, with reduced working hours and staff. According to a presentation from the United Nations Legal Identity Agenda Task Force, an effort dedicated to tackling issues of legal identity from birth to death, these cutbacks had a “considerable impact” on production of timely and reliable death statistics.

“What I am afraid of is that in the wake of the pandemic you will have an unaccounted number of deaths that will never be included in vital statistics,” Mrkić says. “It might be impossible to get the actual numbers in many countries.”

Researchers stress it’s important not to be discouraged. Mrkić points out that there are some hopeful stories.

Some countries, like Costa Rica and Uganda, have dispatched workers to typically disconnected areas to get better counts, while others have deployed civil health units to different regions facing higher death burdens due to the pandemic.

Other nations, especially in Latin America, have expanded electronic registration systems for registering deaths, which has improved efficiency and equal access, says Mrkić.

Helena Cruz Castanheira, a population affairs officer for the United Nations Economic Commission for Latin America and the Caribbean, says though results were mixed, many countries, like Colombia and Brazil, have removed barriers to facilitating online death registry via technology.

“South Africa and Ecuador are real standouts — they’ve moved from annual to weekly reporting of mortality statistics,” Silva says. “This pandemic has brought to bear the importance of innovation prioritizing data and dispensing it quickly.”

“We have a long way to go,” Silva says. But he is hopeful given the groundswell of support for better ways to count pandemic deaths.

For a path forward, it will be critical, he says.

“As we like to say, ‘In order to look after the living, you need to count the dead.'”

Pranav Baskar is a freelance journalist.