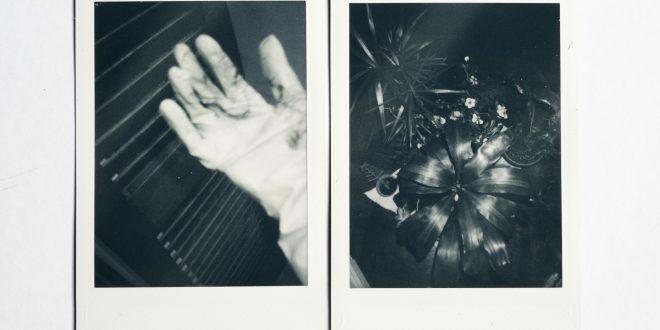 When Argentina went into strict lockdown in March, photographer Celeste Alonso was isolated at her home in Buenos Aires. She started taking photographs, trying to make sense of what it means to be alone for long periods of time — an effort that continues now, months later.

Among the images are daily black-and-white Polaroids. On one of them, she writes down the definition of “instant,” literally trying to capture what a moment in time means.

Alonso thinks of herself as a positive person. She wakes up early every day, gets dressed, tidies up the house and tries to stay busy. She wishes to keep some normalcy in her daily life.

Her daily routine is one thing that she can control in a world that seems out of control. As the future is uncertain, Alonso feels her own mortality in it. “I feel fragile, nude,” she says.

Alonso’s approach to self-portraiture resembles that of Vivian Maier. The American street photographer is known for her detailed black-and-white images of personal encounters and transient moments of the mid-20th century, and her self-portraits are known for rejecting the norms of her time. These portraits were often private and intimate, showing a shadow or corner of herself.

Alonso’s portraits are also thoughtfully posed. The viewer often sees only her shadow. It’s as if only her shadow remains and everything else is surreal — which, she says, is how being in isolation for so many days feels.

Alonso says she is comfortable being alone, but this is different. The loneliness isn’t a choice; it’s the result of external factors.

“This is not something I can decide, which makes it uncomfortable, it creates a void inside me,” the photographer says.

Take, for instance, the custom of drinking mate, which in Argentina is a social activity. People drink tea in a group and share their mate cup with others. Alonso shows the current reality with the image of a single mate cup, next to two feet, hers alone.

The use of Polaroids and their instantaneity play a role in her work as well. Through the use of instant images, Alonso is choosing immediacy, exerting some control over time which is otherwise elusive in the monotonous passing of days in isolation.

What else can she determine? The composition, too, but that’s about all. In a way, the machine takes ownership of the process, which becomes semi-automatic. Giving up control over her pictures reflects her awareness that she can’t control other, larger things around her.

The imposed lockdown is also changing her relationship with her physical being.

Her work includes detailed observation of her ever-changing body, a closer look at often overlooked bodily parts — body hair, feet, armpits — as if she were counting time through the changes in her own body.

“With these images, I try to document not only part of my daily life, but also part of that mental and physical change resulting from so many days in isolation,” she says.

For now, Alonso is no longer in a strict government-imposed lockdown, though there are still some restrictions in place that circumscribe her life. She is still photographing her daily life, trying not to worry much about the future. She’s taking life, one Polaroid at the time.