Critic Of China’s Coronavirus Response Is Under Investigation, Beijing Says

In an announcement posted online, the Beijing branch of the party’s internal corruption watchdog said Ren, a party member, was suspected of “serious violations of discipline and the law.”

Ren went missing in mid-March after an essay he wrote that circulated online obliquely referred to Xi as a “clown stripped naked,” although it did not name the Chinese leader, Reuters reported at the time, citing three of Ren’s friends.

The announcement on Tuesday said Ren was “undergoing disciplinary review and supervision and investigation.” As is customary, it did not give details.

It wasn’t Ren’s first run-in with the authorities. In 2016, he criticized Xi’s efforts to force the media in China to toe the party line and function as an ideological tool. Ren’s social media accounts – which had millions of followers – were quickly shut down and he became the target of a government campaign to discredit him.

Before retiring in 2014, Ren was as head of state-owned Beijing Huayuan Group. He was known for being outspoken and controversial, with some even likening him to Donald Trump.

Ren is a so-called “princeling,” or child of party officials, and served in the military before getting a law degree and going into real estate and banking.

Because of his pedigree and connections within the party, Ren had previously enjoyed some protection, said Jude Blanchette, an expert in Chinese politics at the Center for Strategic and International Studies.

“Xi has no tolerance for dissent, and the fact that he finally moved against Ren indicates that there’s no one with sufficient power to block his actions,” he said.

“The real question is what do they do with him.”

Ren was not alone in his criticism of the government’s handling of the coronavirus outbreak, but he may have been one of the highest profile critics. Many people expressed unease with the way the authorities dealt with the epidemic. Web censors wiped much of that criticism from online forums and social media, and the government has been promoting a narrative of triumph in the face of the disease. 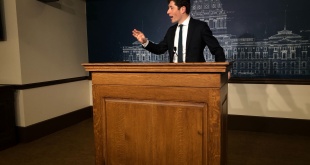 Ahmaud Arbery: A Look At His Life Before It Was Cut Short

NPR's Mary Louise Kelly speaks with Aaron Morrison of the Associated Press about who Ahmaud Arbery was to his family, friends and community.