Home / News from NPR / After Fleeing Crisis, Venezuelan Migrants Now Struggle In Coronavirus Lockdown
Colombia is home to about 1.7 million who fled neighboring Venezuela in recent years. Now that it has shut down to prevent the spread of the coronavirus, the migrants say they are extra vulnerable.

Álvaro Callama is struggling to survive an economic double whammy.

A Venezuelan electrician, he fled his homeland two years ago amid a devastating economic crisis that left him too poor to buy food. He moved to neighboring Colombia, where Callama — nothing if not resourceful — worked three jobs: picking fruit, laying bricks and guiding tourists on horseback rides.

But just as Callama, the father of a 3-month-old boy, seemed to be marching toward stability, the Colombian government on March 24 declared a nationwide lockdown to prevent the spread of the novel coronavirus. Nonessential businesses are closed and millions of people have lost their jobs, including Callama and several relatives.

“My mother works in a restaurant but all the restaurants have shut down,” says Callama, who lives in La Calera, a farm town on the outskirts of the Bogotá. “My uncle is a welder but he was laid off. We are trying to figure out what to do.”

They have a lot of company. Of the nearly 5 million Venezuelans who have fled their country in recent years, about 1.7 million have settled in Colombia. Many of them are undocumented migrants who get by working odd jobs. It’s a hand-to-mouth with the worst off sleeping in the streets.

That makes them especially vulnerable to both COVID-19, the disease caused by the new coronavirus, as well as to the economic shutdown, says Daniel Pagés, president of the Association of Venezuelans Living in Colombia.

“It’s a very difficult situation,” Pagés says. “Imagine if you only had money for your food or your lodging for one day” and there was no work the next day.

Colombia has registered more than 1,160 confirmed cases of COVID-19 and 19 deaths. It has closed land and sea borders and grounded nearly all flights. But due to a lack of testing, it’s unclear how many Venezuelans in the country may be infected.

Although Colombian President Iván Duque’s government says it will distribute subsidies to impoverished Colombians, no provisions have been made for Venezuelan migrants.

Last week, police were called in to disperse throngs of enraged poor people, including Venezuelan migrants, who showed up in front of the city halls in Bogotá and Medellín after they received false WhatsApp messages claiming that officials were planning to distribute emergency cash.

“It’s incredible how, in these times, some are willing to play with the hopes of the people,” tweeted outraged Medellín Mayor Daniel Quintero.

Hard times have also come to Venezuelans who have settled in smaller Colombian towns and villages. Among them is Alex Aguirre, a chef from the north-central Venezuelan city of Maracay. He used to own two Maracay restaurants but hyperinflation and food shortages forced him to close. Five years ago, he moved to Colombia and had a rough landing.

In a Bogotá restaurant, Aguirre worked such late hours that he was unable to catch a bus back to his cramped apartment. So, he slept on park benches until dawn when public transportation resumed. Then, he’d return home, shower, eat breakfast, then rush back to the restaurant.

“It was very difficult for me to try to start again in a new city, a new country,” Aguirre says.

Eventually, he moved to the Pacific coast town of Tumaco and opened a seafood restaurant. But now he’s had to close that place down, too. Not only is he dipping into his savings to survive, but he also says he’s no longer able to send money to family members back in Venezuela.

For now, some of the few helping hands for Venezuelan migrants are coming from the United Nations’ refugee agency and from private charities.

In La Calera, where the low cost of living and proximity to Bogotá has attracted about 600 Venezuelan migrants, many migrants depend on an organization called Sanando Heridas, or Mending Wounds. The charity was founded a decade ago to help impoverished Colombians but now more than half of its beneficiaries are down-and-out Venezuelans.

The organization provides emergency food rations and employs about 40 Venezuelan migrants to pick gooseberries on a nearby farm. But amid the health crisis, food donations to the charity have slowed to a trickle while the gooseberry project has been suspended to avoid the risk of spreading coronavirus among the workers.

María Victoria García, one of the founders of Sanando Heridas, points out that few Venezuelan migrants have health insurance. So, frustrating as it may be, she says it’s especially important for them to spend the next few weeks at home.

“It’s no good to be earning money,” she says, “if people are getting sick or exposing themselves to the virus.” 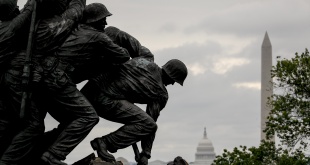 An unusual coalition is forming in the Texas city to oppose President Trump's border wall. The city is standing up to the Justice Department, which is trying to seize hundreds of acres of land there.