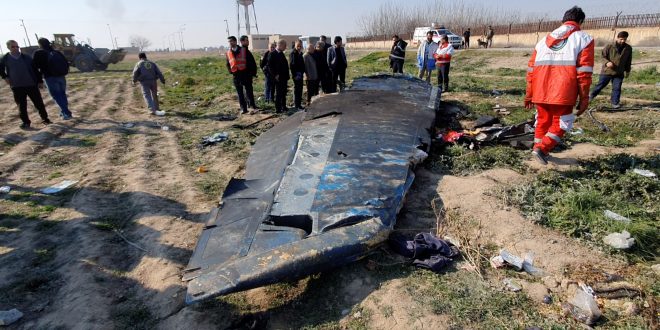 Some Canadians Are Angry At The U.S. Over Iran’s Downing Of Flight 752

Canadians have been questioning who is at fault for the downing last Wednesday of a plane carrying passengers from Canada, Iran and other nations.

Over the weekend, Iran admitted accidentally shooting down the Ukraine International Airlines Flight 752, killing all 147 onboard.

But some prominent figures in Canadian business and media have pinned part of the blame on the United States. They say the U.S. provoked Iran by killing a top Iranian commander, Maj. Gen. Qassem Soleimani.

Michael McCain, the billionaire CEO of Maple Leaf Foods, tweeted late Sunday he was “very angry.” He asked, were the passengers “collateral damage of this irresponsible, dangerous, ill-conceived behavior?”

McCain was not the only one. Many in Canada are questioning why President Trump ordered the killing of Soleimani when he did. Iran retaliated with attacks against American forces in Iraq, which the U.S. said caused no U.S. casualties. Iran later unintentionally shot down the Ukrainian plane because of “human error,” Iranian officials said.

“I think a significant question that Canadians, particularly the families of these victims, are going to have is, are 63 Canadians dead because of the unintended consequences of a decision made by the U.S. president?” Katie Simpson, Washington correspondent for Canada’s CBC News, reported the day after the plane was downed.

Canadian authorities have since lowered the number of Canadian passengers killed to 57.

Charles Adler, a popular Canadian conservative talk-radio host, would not let Tehran or Washington off the hook.

“Iran’s recklessness comes in response to the United States-ordered killing of Iran’s architect of terror, the head of their special Quds Force, General Soleimani,” Adler said in a recent show. “I’ll go to my grave believing those innocents who died aboard Ukrainian Airlines Flight 752 would not have died had it not been for Trump’s decision to kill the general.”

That commentary went viral. So did a Maclean’s newsmagazine column written by another conservative commentator, Scott Gilmore, which featured this blunt headline, “Donald Trump gets impeached — 57 Canadians die.”

Speaking to CBC, Gilmore said, “I did see a direct line between the impeachment and the president afterwards being outraged at how unfairly treated he saw himself and continually trying to change the topic to the economy or to the strength of the U.S. military.” It was a change of topic, Gilmore said, that led to the U.S. killing of Soleimani and resulted in Iran downing Flight 752.

But many in Canada’s political and military establishment see the events differently.

“This is a failure of Iranian military planning,” says retired Maj. Gen. David Fraser, who led Canadian combat operations during the war in Afghanistan. Iranian military leaders “knew they were going to strike into Iraq, they were going to put their air defense systems on high alert, and they didn’t coordinate with the civilian authorities. So that’s just a failure of the Iranian command control structure to manage their airspace,” he says.

Prime Minister Justin Trudeau has also avoided pinning any blame on Trump when asked directly about it by reporters, as he was over the weekend.

“The reality is there have been significant tensions in that region for a long time. And what we are calling for now is a de-escalation to ensure that there are no more tragic accidents or loss of civilian life,” Trudeau said at a news conference in Ottawa. “Our focus right now is primarily on ensuring accountability, answers and closure for the victims, and that is what we are engaged with.”

Trudeau said the questions that need to be answered are all to be found in Iran. The Iranian government issued 11 visas to Canadian crash investigators and officials.

2020-01-13
Share
Previous Esper: U.S. Could Strike Iran Or Proxies ‘Where Legally Available And Appropriate’
Next Fear Of Aftershocks Keep Many Puerto Ricans Out Of Their Homes

The pandemic and contentious national politics have left many Americans disheartened. Some are turning to little things to find joy. For one group of New Yorkers, that's outdoor Zumba classes.