In Montana, A Liberian Refugee Mounts A U.S. Senate Challenge

In the early 1990s, Wilmot Collins and his wife, Maddie, escaped the Liberian Civil War. Broke and starving, they ended up in Helena, Mont.

“Why do you think we fled?” Collins asked. “We fled because we wanted a second chance.”

Soon after moving to their first home, a neighbor knocked on their door and alerted Collins to hateful graffiti outside his house.

This wasn’t the first racist threat he had received since his resettlement in the U.S. and Montana. But ironically this moment, nearly 25 years ago, was when he knew Montana would be his home. That’s because that same morning, a brigade of neighbors showed up to help them clean the graffiti.

“People always say, ‘Oh man, you know you’re in Montana, do you experience racism down there?’ ” Collins said. “I say, ‘Yeah, but how your community reacts to what happens will determine whether you belong or not.’ ”

Instead of moving, he and Maddie stayed and built themselves a new life. Collins started working as a janitor at a school, then became a substitute teacher, and eventually a social worker. On the side, he coached soccer and served on the United Way and other local boards. His wife is a nurse at the local VA hospital. They raised two kids in Helena.

His son, who went on to study political science at the University of Montana, urged him to consider entering politics not long after President Trump took office in 2017.

Collins’ rise was fast. Later that year, he narrowly defeated Helena’s entrenched mayor (the race is technically nonpartisan, but both men are Democrats), making history by becoming the capital city’s first black mayor since its incorporation. Now he has his eyes on a higher position: a U.S. Senate seat that Democrats had previously held for nearly a century before losing it in 2014.

Between his job, his family and mayoral duties, Collins squeezes in every minute he can to campaign.

For Collins, the strategy is to meet as many people as possible and make connections on common issues such as trade and student loan debt. His scope isn’t just Democratic-leaning towns like Helena but also rural, conservative-leaning farming towns.

“The last thing I want to dwell on is race. It’s divisive, and I don’t want to deal with that,” Collins said.

But he has had to. When Trump tweeted that four Democratic lawmakers of color should “go back to the countries they came from,” Collins’ possible opponent, Republican Sen. Steve Daines, heartily backed the racist tweet with a pledge of support on his Twitter account.

“He’s trying to say because they’re black and brown, they need to go back to Africa, where I’m from,” Collins said. “But that’s wrong. I’m an American. I’ve served this country honorably.”

Staff for Daines did not make the senator available for an interview. In a statement, a spokesperson said Daines “looks forward to having a thoughtful discussion with Montanans on how to best protect our Montana way of life.”

While Collins is considered a long shot, his campaign is not going unnoticed in an overwhelmingly white state that Trump won by more than 20 points. Montana is also the least black state in the country, according to recent census figures.

“As a historian, I’m absolutely delighted, because this opens up a whole conversation about the history of race in Montana,” said professor Tobin Miller Shearer, who runs the African American studies program at the University of Montana — the third-oldest such program at a public university in the country.

Shearer believes Collins’ run will force Montanans to confront — and discuss — what has been a long and violent history of racism and KKK activity in the Northwest.

This largely white region has been a hotbed of extremism for more than a century. Hate group monitors such as the Montana Human Rights Network are reporting a recent spike in white nationalist sentiment and recruitment, particularly in rural areas, since 2016.

The group’s co-director Rachel Carroll-Rivas says that Collins’ candidacy is being met with excitement and anxiety.

“I think there’s a reason to be concerned for the safety of people of color, including immigrants right now in Montana, in the Pacific Northwest and across the U.S., because of the vitriolic scapegoating of immigrants and brown folks by activists and elected officials,” Carroll-Rivas said.

She believes that Collins is doing precisely what he should to respond to hate: being out in the open, surrounded by friends.

At least in Helena, that’s easy. Collins appears to know just about everyone.

After COVID-19 Hit The U.S., Our New Reality Started 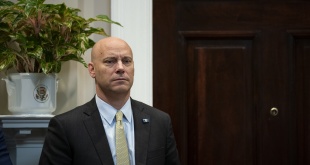 NPR's Rachel Martin talks to Holly Bailey of The Washington Post about protesters in Minneapolis who have taken to the streets for a second night after a black man died in police custody.