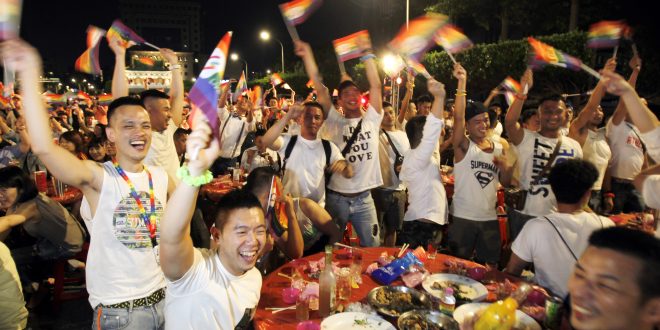 More than a thousand people participated in a mass wedding banquet in Taiwan on Saturday to celebrate the island becoming the first place in Asia to legally recognize same-sex unions.

The event included a wedding ceremony for about 20 couples. Couples walked down a red carpet at the wedding banquet, surrounded by jubilant supporters. Supporters gathered around the venue, camping out on picnic blankets to watch the ceremony and stage performances.

Earlier this month, Taiwan’s legislature voted 66 to 27 to recognize same-sex marriages. Taiwan’s high court had ruled in 2017 that forbidding the marriage of same sex couples violated Taiwan’s constitution, and set a two-year deadline for the legislature to pass a corresponding law or same-sex marriage would become legal automatically.

NPR’s Laurel Wamsley reported that marriage equality was part of President Tsai Ing-wen’s 2016 campaign platform. Before the vote in Taiwan’s state legislature, Tsai tweeted, “Good morning Taiwan. Today, we have a chance to make history & show the world that progressive values can take root in an East Asian society. Today, we can show the world that #LoveWins.”

Chi Chia-wei, whom The New York Times calls the “godfather” of Taiwan’s gay rights movement, told the news outlet, “Progress is good. More progress is even better.” Chi, who was imprisoned by Taiwan in 1986 for coming out as gay, told the NYT the issues of transnational couples and full adoption rights must still be addressed.

Same-sex marriages remain illegal throughout the rest of Asia, and in some parts of Africa, it is considered a crime. But as the NYT notes, Taiwan has been a leader of gay rights in Asia and its annual gay pride parade in Taipei routinely draws thousands.

Louisiana’s Governor Orders That Masks Must Be Worn

China banned Senators Marco Rubio and Ted Cruz as well as administration officials from entering China in response to U.S. actions in response to the country's treatment of its Uighur Muslim minority.