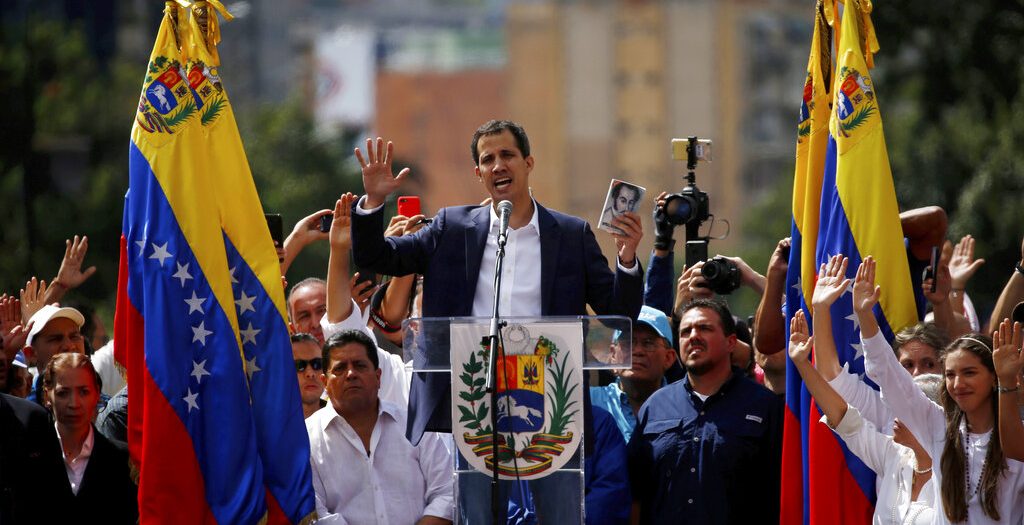 The U.S. swiftly proclaimed its support for Guaidó. Maduro responded by announcing a break in diplomatic relations with Washington.

Guaidó, the 35-year-old recently elected head of Venezuela’s National Assembly, took the oath of office on an outdoor podium in Caracas, flanked by yellow, blue and red Venezuelan flags. He raised his right hand as a crowd erupted in cheers. He promised to serve as interim leader and call for general elections.

“The people of Venezuela have courageously spoken out against Maduro and his regime and demanded freedom and the rule of law,” President Trump said in a statement. He pressed other governments to recognize Guaidó and pledged “to use the full weight of United States economic and diplomatic power to press for the restoration of Venezuelan democracy.”

Maduro has not agreed to cede power. He announced Wednesday afternoon that U.S. diplomatic personnel had 72 hours to leave Venezuela. In a televised address from the presidential palace, Maduro accused Guaidó and Washington of staging a coup.

In a statement issued late Wednesday. U.S. Secretary of State Mike Pompeo said the Trump administration does not recognize the Maduro government or its authority to break diplomatic relations with the United States and “to declare American diplomats persona no grata.”

“We call on the Venezuelan military and security forces to continue protecting the welfare and well-being of all Venezuelan citizens, as well as U.S. and other foreign citizens in Venezuela. We call on all parties to refrain from measures that are inconsistent with the privileges and immunities enjoyed by members of the diplomatic community. The United States will take appropriate actions to hold accountable anyone who endangers the safety and security of our mission and its personnel.”

Earlier in the day, Guaidó issued a statement urging all foreign embassies in the country to disobey Maduro’s 72-hour deadline and not to remove their diplomats.

In addition to the U.S., Canada and nine other governments in the Western Hemisphere, including Brazil, Argentina and Colombia, recognized Guaidó as interim president, the AP reports. The Organization of American States also backs Guaidó.

The government of Mexico said it would follow the principle of non-intervention and not withdraw recognition from a government of a country with which it maintains diplomatic relations, in effect siding with Maduro.

NPR correspondent Philip Reeves told All Things Considered that the protesters he spoke with on the streets of Caracas on Wednesday were happy, but not ecstatic.

“They know this is far from over,” Reeves said. “They’ve been through periods of hope before, especially in 2017, when there were four months of protests that led to nothing. Having said that, after hyperinflation, deepening poverty, acute food shortages, medical shortages — they are daring to hope and to speak up because they desperately want change.”

Carlos Gonzales was one of the Venezuelans in the crowd when Guaidó took the oath. “This government, they destroy our democracy, and I want our democracy back,” he told Reeves. “I want our rights back. It’s all I want.”

Guaidó was empowered to try to take the reins of government after Venezuelans answered his nationwide call to rally for regime change. The demonstrations were timed to coincide with the anniversary of a 1958 coup that toppled military despot Marcos Pérez Jiménez.

Early Wednesday, Guaidó tweeted that protests were underway in Caracas and the coastal cities of Carúpano and Maracaibo, showing that his movement had reached distant locations. He used the protest hashtag #GritemosConBrio, which means “Let’s cry out loud” and also is part of the chorus of the Venezuelan national anthem.

In 2017, Maduro snuffed an attempt to oust him. Months of protests nationwide ended after more than 120 people were killed, mostly by security forces.

Jason Marczak, the director of the Atlantic Council’s Adrienne Arsht Latin America Center, said Guaidó’s movement was stronger than previous pushes to unseat Maduro because the opposition was united around one leader and enjoyed strong support from the U.S. and other nations.

This round of protests began after Maduro took the oath of office for a second term on Jan. 10. Observers said his election was illegitimate after his main opponents were barred from running.

Citizens burned trash and clashed with troops late Tuesday in some 60 working-class neighborhoods nationwide, Reuters reports. The Venezuelan Observatory of Social Conflict, a body that monitors violence, says that a 16-year-old was killed overnight in Caracas.

Under Maduro’s rule, Venezuela’s economy has nose-dived, inflation has soared and basic foods and medical supplies have grown scarce. Millions of Venezuelans have fled the country, mostly to neighboring Colombia and Brazil as well as Ecuador, Peru and other Latin American countries. Most opposition leaders have been exiled, imprisoned or banned from running for office, John Otis reports for NPR.

Guaidó breathed new life into the opposition, bringing together followers in town hall meetings called cabildos and pledging to bring about open, free elections. He has urged the military to abandon its loyalty to Maduro, offering amnesty to officers who turn against the president. On Wednesday, he repeated his call: “To all the armed forces, our call is very clear, from this parliament we shake your hands and ask you to stand with the Constitution and the people, your people,” Guaidó wrote.

Much of the military has so far remained loyal to Maduro even though troops’ salaries have shrunk because of inflation and their equipment has decayed amid the years-long economic crisis, Reuters reports. Maduro also has cultivated senior officers by lavishing them with privileges, including key posts within the lucrative state oil monopoly.

Venezuela’s government said Monday it had put down a rebellion within the security forces. Officials said 27 national guardsmen were arrested after they allegedly kidnapped five officers, raided an outpost and stole weapons, NPR has reported. These mutineers were low-level officers, however, Reuters noted.

Maduro exhorted his supporters to turn out in rival demonstrations on Wednesday. “Men and women of the fatherland, be calm and mobilize the people to win peace and stability for Venezuela,” Maduro wrote. “The streets belong to the people!”

Bolivian President Evo Morales, who like Maduro is a leftist, tweeted his support: “Our solidarity with the Venezuelan people and our brother Nicolas Maduro, in these decisive hours in which the claws of imperialism seek again to mortally wound the democracy and self-determination of the peoples of South America.”

The U.S., Brazil and the Organization of American States had lent their backing to Venezuela’s opposition before Wednesday’s protests, Otis reports. Vice President Pence extended his support to the National Assembly via a video with Spanish subtitles that he posted to Twitter on Tuesday.

“The United States supports the courageous decision by Juan Guaidó, the president of your National Assembly, to assert that body’s constitutional powers, declare Maduro a usurper, and call for the establishment of a transitional government,” Pence said. “On behalf of the American people, we say to all the good people of Venezuela, estamos con ustedes. We are with you.”

“Yankee, go home,” she added in a statement, according to the Telesur news service, which is partly funded by the Venezuelan government.

Rep. Ro Khanna, D-Calif., criticized the Trump administration Wednesday for what he called hypocrisy after the president’s refusal to condemn Saudi Arabia after the journalist Jamal Khashoggi was killed in Riyadh’s consulate in Turkey. “Let me get this straight,” Khanna wrote. “The US is sanctioning Venezuela for their lack of democracy but not Saudi Arabia?” 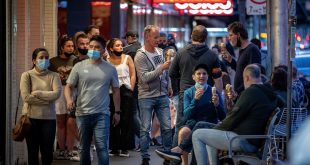 ‘None Of This Has Been Easy’: Melbourne, Australia, Ends Its 111-Day Lockdown 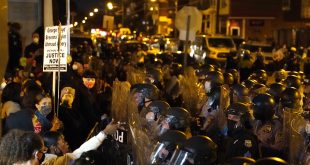 Hurricane Zeta came ashore in Louisiana on Wednesday as a Category 2 storms. The hurricane strengthened before landfall and is expected to bring a storm surge up to 11 feet.