Union Pacific Locomotive 4141 will take Bush's body to College Station, Texas on Thursday. He will be laid to rest at the George H. W. Bush Presidential Library Center at Texas A&M University.

Aboard The 4141 Train, Bush To Get Final Ride Through Texas Countryside

This week, the Bush family has accompanied the coffin of former President George H. W. Bush over thousands of miles by car and by plane.

But the final leg of the journey in Texas will be made by train – and no ordinary train.

Union Pacific Locomotive 4141 will take Bush’s body to College Station, where he will be laid to rest at the George H. W. Bush Presidential Library Center at Texas A&M University.

Union Pacific made the locomotive in Bush’s honor and unveiled it near his library as part of an exhibition in 2005.

The two-locomotive, 11-car train will leave around 1:15 p.m. CT on Thursday and arrive in College Station about two and half hours later.

“We’ll be moving at a pretty modest speed,” said Brenda Mainwaring, assistant vice president of public affairs at Union Pacific. “We want to make sure that the people who have taken the time to line the route to pay their respects have the opportunity to do that.”

Since 2005, the train has been at work across the country.

“It’s not just for show,” Mainwaring said. “Every locomotive has to pay its own way on the Union Pacific. All of our locomotives haul freight, this one has hauled its share of freight as well. We operate in 23 Western states, so it has been all over the Western United States.”

So why did Bush decide to take his final journey on a train – the first president since Dwight D. Eisenhower in 1969 to do so?

Mainwaring said Bush was very involved with the railroad and that he used to talk about fond memories he had traveling with his family on trains.

“I think because of those very fond memories,” she said. “But I think it was also because he knows that this route, and traveling by train, allows him to travel through the countryside that he loved so much between Houston and College Station and allow all those people who live along the route to pay their own tribute.”

Governors To Work With Rockefeller Foundation To Improve Virus Testing In U.S. 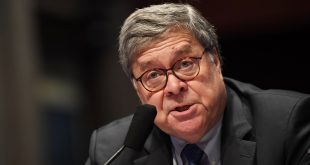 Attorney General William Barr says he won't take any action to influence the presidential election, but looming in the background is a probe apparently focused on the Obama administration.