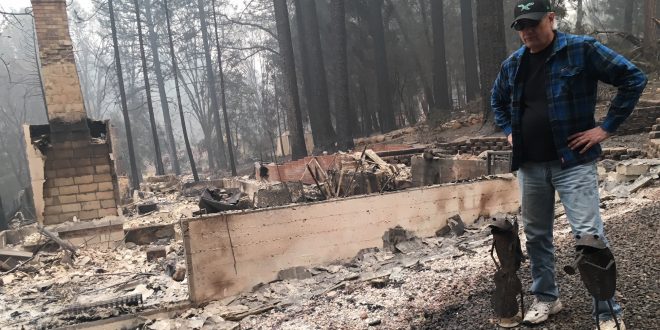 Separated By Fire, Man Launches Wrenching Search For His Wife

Editor’s Note: This story contains some disturbing details that may be upsetting.

Since the deadly Camp Fire barreled into the Northern California town of Paradise, Jim Knaver, who is in his 60s, has barely slept or eaten. The elementary school teacher’s days have been consumed by visits to evacuation centers and hospitals as he searches for his 67-year-old disabled wife.

“Her name is Anna Hastings and she goes by Toni,” he tells an evacuation center volunteer who checks a list of those staying at the shelter. “She’s like 5-foot tall, blonde hair, blue eyes.”

But she’s hasn’t signed in.

Hundreds of people are missing in Northern California and dozens are dead after the fast-moving Camp Fire decimated the mountain town of Paradise. For every person still unaccounted for, there are family members and friends desperately trying to find them.

Knaver’s search began last Thursday, a day that started out like any other beautiful fall day in the pine-filled mountain town. The only exception: a light bit of smoke Knaver noticed in the far distance. So, before he left for work, he and his wife prepped the way they always had during their 19 years of living up in wildfire country. He double checked there was nothing flammable near the house while she monitored the local TV news.

As Knaver spent about 45 minutes cleaning the roof and yard of pine needles that had fallen over night, he remembers feeling relieved that he had spent the last seven years fire-proofing his yard as best he could. He had cleared the property of brush; he’d installed sod around the house and spent thousands of dollars trimming the lower limbs off all his pine trees.

When he went back inside, Toni told him she saw no mention of fire on the news. So, Knaver headed to work in nearby Chico where he teaches the 4th grade.

“I told her I’m gonna go .. half way down the mountain,” Knaver says. “I promised her if I saw anything that made me feel a little bit uncomfortable or [if I] got a strange vibe, I was going to turn around half way and come home and call in sick.”

But he didn’t because down the road, the smoke was thin — like an ordinary Butte County grass fire. Within a couple hours, however, everything changed: The winds picked up; the fire began to roar. Knaver left his classroom and raced back toward his home until he could go no further. The California Highway Patrol had set up a roadblock and wasn’t letting anyone up the mountain.

“I told the CHP officer my wife is disabled she doesn’t drive a car, she doesn’t have a cell phone and she’s not going to leave without the dogs and cats,” Knaver says. “And I really need to get up there to get her. And he goes: ‘Turn that truck around, no one’s getting up here.'”

So he phoned the Butte County Sheriff’s Department and requested a welfare check at his home. Then, he phoned Toni and told her the road was closed. They began discussing her options — leave with neighbors or, in a worst-case scenario, head across the street into a clearing. Over the next few hours, the couple spoke several times. Then, sometime after 11 a.m., Knaver tried calling his wife again but couldn’t get through because the phone lines were down.

He began hoping she’d escaped in a neighbor’s car. And then he began his search for her — checking hospitals, evacuation shelters. Friends and family from throughout the U.S., Canada and Ireland were also making calls and checking a Red Cross website. No one had any information.

After five days, Knaver got behind fire lines and headed into Paradise. What he saw as he and a visitor drove into the still-smoldering downtown, left him stunned.

As is often the case with wildfires, the destruction is haphazard. In Paradise, the Big O Tires shop stands; an antique store and restaurant are burned to the ground. Down the street, a convenience store is melted into an unrecognizable mass. Businesses Knaver patronized for two decades — some owned by friends — are now burned beyond recognition. Thousands of homes reduced to ash; others untouched by flames.

“I’m just praying that my wife and dogs and cats are in the untouched homes,” he says.

As Knaver heads into his neighborhood, he loses track of where he is because nothing looks like Paradise anymore. He prays out loud: “Please God, let Toni and the animals be in the house.”

As he turns the final corner and sees some houses standing, Knaver holds out hope. But as he approaches his driveway, it’s extinguished.

The following day, Jim Knaver gets a terrible phone call. It’s from the Butte County Coroner’s Office. They tell him that search dogs on his property found remains believed to belong to his wife of 43 years: Anna Irene Hastings, known by her friends and family as “Toni.”