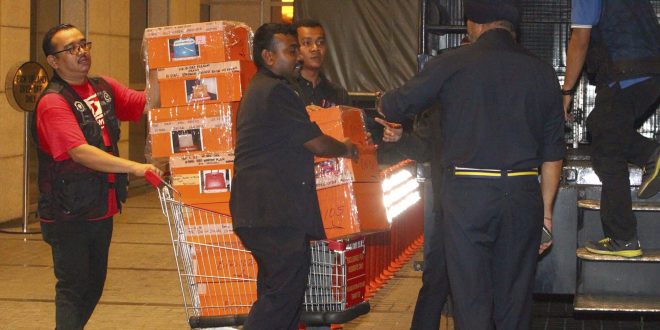 Barely a week after former Malaysian Prime Minister Najib Razak was defeated in elections, police carried out a pre-dawn raid at one of his residences, confiscating dozens of suitcases containing cash, jewelry and hundreds of designer bags as part of an ongoing corruption probe.

The Associated Press reports that Malaysian television “showed police carting away orange boxes containing handbags and luggage of various sizes from the condominium. Each orange box has a label and a picture of the bag.”

According to Fortune magazine the handbags come at a steep price, “The cost of new [Hermes] Birkins range from $12,000 to more than $200,000, and they regularly sell on the secondary market for more than their original sales price.”

“Exactly how much jewelry, I would not be able to say,” Amar Singh, the director of police for commercial crime investigations, told reporters at the scene, according to Reuters. “We know that we confiscated bags containing jewellery and the [amount] of jewelry is rather big.”

Singh said the raid was in connection with the investigation into the 1Malaysia Development Berhad (1MDB) sovereign wealth fund.

Later, the Malaysian Anti-Corruption Commission said it had found evidence of a suspicious $10.6 million transfer from a state fund to an account belonging to Najib, according to Reuters. It said Najib had been summoned to appear by the commission.

Najib, whose defeat last week by 92-year-old former Prime Minister Mahathir Mohamad, came as a surprise upset, has been embroiled for years in the 1MDB scandal. The United States and five other countries, including Switzerland, are investigating claims that billions of dollars were siphoned off from the fund. Najib has denied all wrongdoing.

Nearly two years ago, NPR’s Jim Zarroli reported that the U.S. Justice Department was suing to recover funds lost in the scheme. At the time, Najib was listed as a suspect thought by U.S. officials to have personally received hundreds of millions of dollars from the fund:

“U.S. officials say a total of $3.5 billion, raised through bond offerings made by the investment fund 1MDB between 2009 and 2015, was laundered through a series of sham transactions and shell corporations by “high level officials” of the fund and their associates. The U.S. is seeking to reclaim only about $1 billion right now, because that’s how much officials have been able to trace through the system.

The money was allegedly used to purchase, among other things, artwork by Vincent Van Gogh and Claude Monet, a $35 million jet, high-end real estate and rights to the film The Wolf of Wall Street, U.S. officials said in a statement.”

Since then, U.S. investigators say the figure is closer to $4.5 billion, some of which ended up in Najib’s bank account. The AP says $23 million of it was used to buy a pink diamond necklace for Najib’s wife, Rosmah.

According to the AP, “Police conducted simultaneous raids at several other locations including Najib’s family house, his former office as prime minister and an official residence. Documents related to 1MDB were taken from the office and police are still trying to crack open a safe in Najib’s house, [Singh] said.

2018-05-18
Share
Previous Clinics That Refer Women For Abortions Would Not Get Federal Funds Under New Rule
Next State Dept. Has ‘Serious Concerns’ For Safety Of Utah Man Imprisoned In Venezuela

In Los Angeles, A Program To Get Those With Mental Illness Away From Jails

The largest mental health treatment centers in the U.S. are often jails, including in Los Angeles. LA officials are struggling to try to change that through an innovative diversion program.