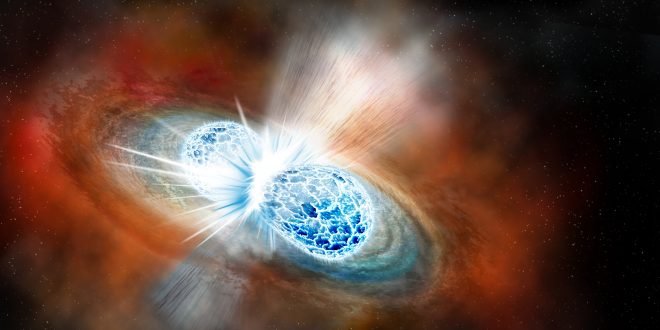 For the first time, scientists have caught two neutron stars in the act of colliding, revealing that these strange smashups are the source of heavy elements such as gold and platinum.

The discovery, announced Monday at a news conference and in scientific reports written by some 3,500 researchers, solves a long-standing mystery about the origin of these heavy elements — which are found in everything from wedding rings to cellphones to nuclear weapons.

It’s also a dramatic demonstration of how astrophysics is being transformed by humanity’s newfound ability to detect gravitational waves, ripples in the fabric of space-time that are created when massive objects spin around each other and finally collide.

Albert Einstein predicted the existence of these ripples more than a century ago, but scientists didn’t manage to detect them until 2015. Until now, they’d made only four such detections, and each time the distortions in space-time were caused by the collision of two black holes.

That bizarre phenomenon, however, can’t normally be seen by telescopes that look for light. Neutron stars, by contrast, spew out visible cosmic fireworks when they come together. These incredibly dense stars are as small as cities like New York and yet have more mass than our sun.

In this case, what scientists managed to spot was a pair of neutron stars that likely spent more than 11 billion years circling each other more and more closely before finally slamming together about 130 million years ago.

This explosive impact created ripples in space-time that traveled all the way to Earth, arriving at 8:41 a.m. ET on Aug. 17 and setting off detectors in the Laser Interferometer Gravitational-Wave Observatory — whose founders won the Nobel Prize in physics earlier this month.

That morning, all of a sudden, scientists’ cellphones began to ring.

“A phone alarm went off in my pocket,” recalls David Shoemaker of MIT, a physicist who serves as the spokesman for the LIGO Scientific Collaboration. He had been in a mundane organizational meeting, which was immediately abandoned. “The morning was transformed from ordinary bureaucracy to a morning of slightly breathless discovery as we tried to figure out how we could most quickly get the news out to observers to try and make the most of this event.”

What LIGO had seen did not look like the calling card of colliding black holes.

“That put us into a very high state of excitement,” Shoemaker says.

Quickly, the LIGO team consulted with colleagues at Virgo, another gravitational wave detector located near Pisa, Italy. That lab had detected the waves, too, and their data helped pinpoint the exact patch of sky where astronomers should aim their telescopes.

The location was in the southern skies, so that meant the first place where astronomers could get to work was Chile. Astronomer Benjamin Shappee was there — and he was asleep.

“I actually woke up in the afternoon, because I work all night when I’m observing, and I just looked at my phone and I saw it was just covered with emails about a new source that was discovered by LIGO,” says Shappee, a professor at the University of Hawaii who was a Hubble fellow at the Carnegie Observatories during the discovery. “My first thought was just, ‘We’re in the perfect position to try to find this.’ ”

He and his colleagues began a mad scramble to figure out which galaxies to look at with which telescopes. As soon as the sun went down in Chile, they started searching for a new source of light among the familiar stars.

“Almost right off the bat, maybe 15 minutes into observing, I get an email basically saying that they think they found something from the Swope [Telescope], which is amazing,” Shappee says. “And then I get an email almost immediately from Josh Simon, also saying he was on the same galaxy, took another image and found the same source, and it’s real. And so at that point, I said, ‘This is almost too easy.’ ”

Less than 11 hours after the gravitational-wave detectors sounded the alarm, astronomers had their first glimpse of this never-before-seen event involving the neutron stars.

The Carnegie team worked quickly to make observations, because it had only about an hour until this spot was no longer visible in the sky. “It was probably the most surreal experience of my professional career. It was just completely unexpected, out of the blue,” Shappee says.

Other groups were searching, too, with other telescopes.

“We started scanning the region of the sky where LIGO told us the gravitational waves came from, and it took us 45 minutes until we found it,” says Edo Berger, an astronomer at the Harvard-Smithsonian Center for Astrophysics. “It was an incredibly amazing moment, because it just stood out there. It was kind of like searching for treasure and then seeing X marks the spot.”

What all the images showed was a brand-new point of light that started out blueish and then faded to red. This didn’t completely match what theorists thought colliding neutron stars should look like — but it was all close enough that Daniel Kasen, a theoretical astrophysicist at the University of California, Berkeley, found the whole experience a little weird.

“Even though this was an event that had never been seen before in human history, what it looked like was deeply familiar because it resembled very closely the predictions we had been making,” Kasen says. “Before these observations, what happened when two neutron stars merged was basically just a figment of theorists’ imaginations and their computer simulations.”

He spent late nights watching the data come in and says the colliding stars spewed out a big cloud of debris.

“That debris is strange stuff. It’s gold and platinum, but it’s mixed in with what you’d call just regular radioactive waste, and there’s this big radioactive waste cloud that just starts mushrooming out from the merger site,” Kasen says. “It starts out small, about the size of a small city, but it’s moving so fast — a few tenths of the speed of light — that after a day it’s a cloud the size of the solar system.”

According to his estimates, this neutron star collision produced around 200 Earth masses of pure gold, and maybe 500 Earth masses of platinum. “It’s a ridiculously huge amount on human scales,” Kasen says. He personally has a platinum wedding ring and notes that “it’s crazy to think that these things that seem very far out and kind of exotic actually impact the world and us in kind of intimate ways.”

The discovery has consumed the astronomical community in recent weeks. “By my count, 70 astronomical telescopes started looking for this event in the area of the sky that we found it,” says David Reitze, a physicist at Caltech who is executive director of the LIGO project. “This event, in some sense, is the first event that we’ve seen in gravitational waves and in light. It’s a new way to look at the universe.”

What could gravitational waves help astronomers see next? “If we were lucky, we would see a supernova from somewhere in our galaxy,” Reitze says, though he notes that these star explosions go off only every 50 years or so. Perhaps the next cataclysm on deck will be something like a black hole colliding with a neutron star.

Ski Industry Prepares For The Season In The Pandemic

Florida’s Miami-Dade Pushes Back On Loosening Of Coronavirus Restrictions 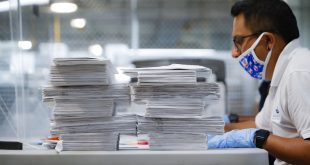 Anita Hill On Sexual Harassment In Hollywood And Beyond