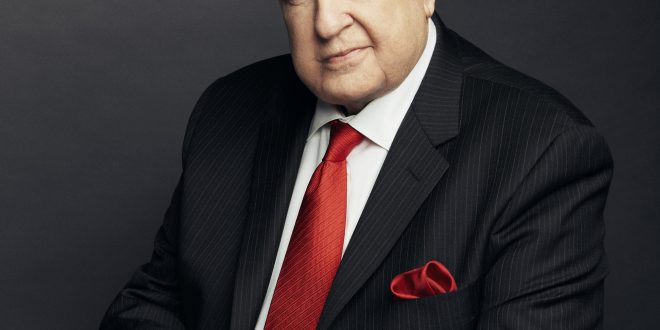 Former Fox News Chairman and CEO Roger Ailes has died, the network says, citing a statement from the late executive’s family. Ailes resigned from his post leading Fox News last July, amid allegations of sexual harassment. He was 77.

Ailes helped found Fox News in 1996. On Thursday, the network initially announced his death by citing the Drudge Report, which had published a statement from Ailes’ wife, Elizabeth.

According to Fox News, that statement reads:

“I am profoundly sad and heartbroken to report that my husband, Roger Ailes, passed away this morning. Roger was a loving husband to me, to his son Zachary, and a loyal friend to many. He was also a patriot, profoundly grateful to live in a country that gave him so much opportunity to work hard, to rise — and to give back.”

“Beth, you are in our thoughts and prayers,” co-host Ainsley Earhardt said, “and so is Zachary, their beautiful son. Roger, rest in peace.”

Ailes was famous for his shrewd leadership of Fox, including his focus on airing conservative opinions and hiring anchors and reporters with big personalities. But he left Fox with a tarnished legacy, facing legal actions over allegations of sexual harassment.

Ailes denied accusations that he built a culture at Fox that encouraged harassment, after a lawsuit by former Fox News anchor Gretchen Carlson prompted other women at the network, including high-profile anchor Megyn Kelly, to step forward with similar claims. He abruptly resigned last July.

In the decades before he created a ratings juggernaut in Fox News, Ailes worked in politics, serving as a media adviser and consultant — most famously for Richard Nixon, whom Ailes helped to win the presidency in 1968. He later worked for other Republican leaders, from Presidents Ronald Reagan and George H.W. Bush to New York Mayor Rudy Giuliani.

Ailes was a producer of the variety and talk program The Mike Douglas Show when he met Nixon. In the years that followed, as NPR’s David Folkenflik has reported, Ailes “kept toggling between producing television specials and serving as a political consultant, sometimes doing both at once.”

The architect of Fox News was also close to President Trump, to whom he gave a weekly slot on Fox & Friends — a show that the president has regularly touted in his tweets from the White House.

Sherman, who wrote a biography of Ailes titled The Loudest Voice In The Room, also spoke to Terry back in 2014, when his book was first published.

Discussing Ailes’ impact on politics and culture in the U.S., Sherman said, “One of Ailes’ lasting legacies will be that for millions of Americans, news is now no longer viewed as a way to be informed about the world; it’s a way of gathering information that advances your side.”

2017-05-18
Share
Previous Tulsa Police Officer Is Found Not Guilty In Death Of Terence Crutcher
Next When Iran Heads To The Polls, A Stark — If Limited — Choice Awaits