The Trump administration said Wednesday that it will continue to waive some sanctions against Iran, a key aspect of the nuclear deal negotiated by the Obama administration and five other world powers.

Under the terms of the deal, Iran agreed to curb its nuclear program in exchange for sanctions relief. But those sanctions waivers need to be periodically renewed, and today was the first deadline to fall during President Trump’s term.

During his campaign, Trump referred to the landmark agreement as the worst deal ever negotiated, as NPR has reported.

Proponents of the deal have been nervous about its fate, NPR’s Michele Kelemen told Morning Edition. She added that its supporters say “that if the U.S. is blamed for the collapse of this deal it will be difficult for the U.S. to get partners back on board. You know, Washington didn’t negotiate this alone. There were the Europeans, the Russians, and the Chinese. And they were also at the table and they still support the deal.”

The Trump administration is currently in the process of reviewing U.S. policy toward Iran.

“This ongoing review does not diminish the United States’ resolve to continue countering Iran’s destabilizing activity in the region, whether it be supporting the Assad regime, backing terrorist organizations like Hezbollah, or supporting violent militias that undermine governments in Iraq and Yemen,” Acting Assistant Secretary of State for Near Eastern Affairs Stuart Jones said in a statement. “And above all, the United States will never allow the regime in Iran to acquire a nuclear weapon.”

While the U.S. says it will continue waiving these sanctions, it is ratcheting up other sanctions related to human rights abuses and the country’s ballistic missile program. This may be intended to “undercut the impression that Trump is softening on Iran,” The Associated Press wrote.

The Department of the Treasury announced that it had designated seven entities in connection with the missile program, including two top Iranian defense officials. It also designated China-based companies that it says are supplying Iran with “missile-applicable items” and an Iran-based company that allegedly supports the country’s ballistic missile program.

Iranians are set to vote Friday in the country’s presidential election. The result has the potential to impact this deal, Michele reported: “If the current president wins, most experts say they expect the status quo. But if a hardliner wins, it could make it easier for the Trump administration to get other countries on board for a tougher approach.” 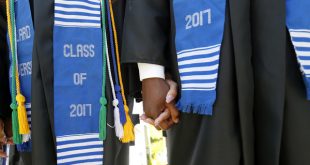 After the rise of BLM, Black students and their families are heading back to HBCUs