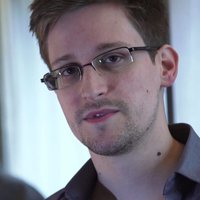 Edward Snowden, the former NSA contractor who leaked a cache of classified documents about U.S. surveillance programs, officially filed for temporary asylum in Russia on Tuesday, a human rights lawyer and WikiLeaks say.

According to Russia Today, a state-funded English-language news outlet, Russian human rights lawyer Anatoly Kucherena delivered the asylum application to Moscow’s Sheremetyevo airport, where Snowden has been stranded for more than 20 days.

After Snowden filled it out, the form was then submitted to Russia’s Federal Migration Service, which has yet to comment on the application.

Kucherena told RT that Snowden did not indicate whether he intended to stay in Russia if granted asylum or perhaps head to one of the three Latin American countries — Bolivia, Nicaragua and Venezuela — that have offered him asylum.

“He arrived on our territory without an invitation,” Putin said, according to The New York Times. “He didn’t fly to us; he flew in transit to other countries. But only when it became known that he was in the air, our American partners, in fact, blocked him from flying further.

“They themselves scared all other countries; no one wants to take him, and in this way they themselves in fact blocked him on our territory. Such a present for us for Christmas.”

Reuters reportsthat Putin went on to say he wants Snowden to go, but he also “signaled that the former U.S. spy agency contractor was moving towards meeting Russia’s asylum conditions.”

As for what’s next for Snowden, RT reports:

“In the event that it is approved, the applicant has a right to stay in the country for 12 months and can then extend this term for another year.

“As Moscow reviews Snowden’s application over the next several days, Snowden will either continue to stay in the transit zone of the city’s airport or move to a center for asylum seekers, the Head of the Public Chamber of FMS Vladimir Volokh told Interfax.

” ‘Right now we are beginning the first stage — the definition of [Snowden’s] legal status. Snowden would have to be in the transit area or FMS can transfer him to the temporary accommodation for refugees or internally displaced persons,’ Volokh said.”