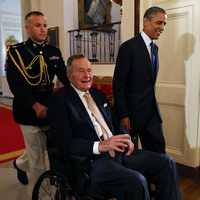 Former President George H.W. Bush, who spent nearly two months in a Houston hospital during late 2012 and early 2013 for treatment of a variety of life-threatening illnesses, was hailed by President Obama at the White House on Monday.

“We are surely a kinder and gentler nation because of you,” Obama told the nation’s 41st president at a ceremony where the 5,000th Points Of Light Award was given to Floyd Hammer and Kathy Hamilton. As The Associated Press writes, the retired couple and farm owners from Union, Iowa, “created Outreach, a nonprofit organization that delivers free meals to children suffering from hunger in more than 15 countries, including the United States.”

Bush, now 89, spoke only briefly from his wheelchair — thanking the president for his “wonderful hospitality.”

The Points of Light awards were established by then-President Bush in 1990. That same year, the Points of Light Foundation was “created as an independent, nonpartisan, nonprofit organization to encourage and empower the spirit of service.”